Omar N.K. Ceesay is the latest writer whose work has been plagiarized.

Mr. Ceesay, who bears the nom de plume (The Hero Poet), felt bad when he came across his poem being used by someone as theirs and sees the act as theft.

“Definitely I {don’t} feel very good. I see the person as a ‘professional’ thief,” he said.

The young budding writer is among a host of Gambian writers who have expressed their displeasure on plagiarism overtly of recent.

His was discovered on a WhatsApp platform recently. The culprit apologized for the act and Ceesay forgave the person.

Ceesay’s story is not unique. Lala Touray is one of the finest young poets in the country. She is famously known to have performed on several national stages, even in the presence of current President Adama Barrow.

Touray once wrote on her Facebook timeline, expressing her discontent about the upcoming poets stealing the content of her poems, some even the entire poem to make it theirs.

The act is becoming common, especially to upcoming writers who are keen in making name in the budding literary culture of The Gambia.

There has been a change of faces in the helm of affairs of the Writers’ Association of The Gambia (WAG) in 2019. And since then, many accolades have been bestowed on writers during award ceremonies. This epoch period has also witnessed proliferation of book launches, among other activities.

The leadership of the association is not taking the issue lightly.

Mr. Sowe, who is the secretary General of WAG and an award-winning writer, said throughout the world, plagiarism is considered illegal.

Plagiarism is a serious issue in The Gambia. The first Gambian writer who took the matter to Court was Patience Sonko-Godwin.

In 2016, three history teachers were found guilty for infringing Godwin’s works. She won the legal suit against Lawrence Jah, Micheal Goba and Mac Collier after the trio failed to file their defence 30 days from the date of service.

The Point newspaper reported on July 18, 2016 that the High Court granted the prayers sought by the Plaintiff and ordered the 1st and 2nd defendants respectively to each pay the sum of D50,000 as damages to Sonko Godwin, and also awarded costs of D40, 000 to the plaintiff (Godwin) against the defendants.

Two years later, in 2018, a high court judge sent Mustapha Ceesay and Ibrahim Ceesay to six weeks imprisonment for defaulting in payment of a fine of five-million and fifty thousand dalasis imposed on them in a judgment in favour of Godwin.

The Ceesay brothers were both teachers at Kinderdorf Bottrop Senior Secondary School. They were found to have infringed the intellectual property of Godwin after a long legal tussle.

NK said the reason upcoming writers plagiarized is because their mentors don’t encourage them to write their own work.

“Sometimes they give them their own work which also kills the spirit of the young writers to be original in their work,” he said.

Nonetheless, NK urged young writers to keep writing their own, while recalling embarking on a conducted tour of various schools across the country to train students on how to write their own books, but the experience he had was unthought-of.

Almost all of them showed me other people’s work, he recalled.

SG Sowe on the other hand opined that lack of knowledge on the existing copyright laws of the Gambia and its weak enforcement leads to plagiarism.

He argued that if an example is set for others to follow, they’ll be careful not to use someone’s work and claim ownership of it.

“Especially teachers in some schools who have the habit of making pamphlets out of people’s books and then in turn sell those books to our school children – we would like to politely ask them to desist from engaging in such practices,” he said.

Sowe, also referred to as ML, urged all Gambian writers to register their works with the Copyright Office of The Gambia under the National Centre for Arts and Culture to enable WAG to fight against piracy.

He called on young writers to read widely in order to gather relevant knowledge on issues and nurture intellectual honesty if they want to be good writers in future.

The Role of Relevant Authorities

NK implored WAG, the Young Writers Association of The Gambia (YWAG) and the Copyright Department to stand up and sensitize the people about this matter.

He added that though WAG is doing great in promoting Gambian literature, they need to sensitize writers more about copyright, saying some of them still don’t know the copyright law.

He suggested the use of media platforms, including newspaper, radio and TV to spread the message.

“So I think it is very necessary for WAG, YWAG and the Copyright Department to sensitize the young writers about the copyright rules and so on,” he said.

SG Sowe said from composition stage to publishing, and further away to promotion, marketing and distribution stages, WAG in partnership with YWAG are controlling each and every step of the book business.

“Furthermore, these form extremely powerful aggregates such as the Book Publishing and Promotion Secretary under WAG to closely monitor such issues. But moreover, we appointed a Copyright Representative under the WAG Executive to also handle such issues,” he said.

Sowe said the goal of the groups is to monitor issues aimed at strengthening influence in political lobbying and judicial battles.

Over the years, he went on, there was a case involving Patience Sonko-Godwin who had her book pirated and henceforth, they thought it wise as an executive to introduce a new position call the copyright representative in their executive in order to handle plagiarism issues.

“In fact, anyone who is a Gambian and you’re a writer, whether you’re doing spoken word poetry, etc. we encourage everyone to register to be a member of WAG to be able to recognize their individual rights. Anyone who doesn’t register with us is not considered a Gambian writer,” he said.

Plagiarist Is A Dead Writer!

WAG President Dr. Cherno Omar Barry agrees that a lot of sensitization is needed to address plagiarism, which he said is unacceptable for any writer and as an association, they need to work to protect works of writers.

“Any writer that does plagiarism is a dead writer,” he said.

But he hastens to add that suspending somebody from WAG would not stop others from continuing plagiarism.

“The copyright act has given a lot of protection to the right holders of any work, so if somebody plagiarizes and there is ample proof against it, there must always be action taken against the culprit. And the law must take its course,” he said.

He said sentences may be removed or adjusted and some can even remove the writer’s byline and make it theirs.

Mr. Ceesay, who is also the director of the National Centre for Arts and Culture (NCAC), advised writers, particularly young ones to be original, urging them “to reflect, draft and write.”

“Now if you write, how do you share it? That is where upmost care is needed because it is very tempting to want to share your poems for example, your story in a WhatsApp group or in an email platform or similar platforms. But if you are doing so, you must be very careful that the moment you share it in those platforms, the work basically can come under attack,” he said.

Ceesay said writers should also reflect on how they communicate their work to the public, while advising young writers to start publishing with newspapers to put it in print, calling it a fixed form to guard their work against plagiarism.

He said another way young writers can guard their works against plagiarism is to choose who they share their work with.

“If you are sharing it with professionals, the danger of plagiarism is less. But if you just throw it out into the open like that, people can misuse it. Sometimes you know, sometimes you wouldn’t know; so it is also very good to always consider who you are sharing your work with.”

He also urged writers to register their works with the NCAC Copyright Department and avoid rushing to share their works online.

When this is done, Ceesay said, if their works are plagiarized or stolen, if they are to take legal action, then the registration papers will act like evidence.

“In summary, one, register your works in the copyright office and share it. And you can even state it that the following poems are fully registered to send a warning to plagiarizers. Number two, know whom you are sharing it with. Number three, endeavor to publish in fixed form in newspaper for example until you are able to do it in a book form,” he said. 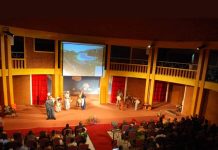