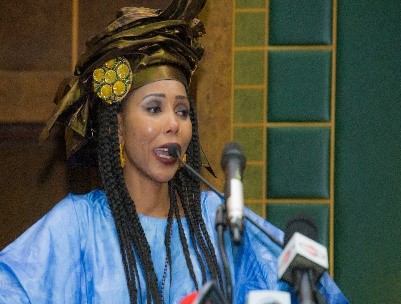 L’Oreal Paris the world’s largest cosmetic company on 13th of May 2020 officially appointed Gambia’s Jaha Dukureh as their ambassador.

Jaha became the newest International spokesperson for the brand.

She described her new achievement as an amazing opportunity as a young African woman, saying most of them don’t make it this far. Historically, people who have been called L’Oreal Ambassadors are the likes of Beyonce (very famous celebrities).

“For me to be a Gambian, to be from Gambisara and from the background I came from, I think it is something that I never dreamt of and never thought would be possible for me, so is an amazing feeling,” she said.

Jaha’s L’Oreal’s endorsement deal motivated her to plan an emergency basic income program for women in the Gambia. She is currently designing the program which she intends to start in Upper River Region (URR).

In this program, she wants every adult woman to receive D2500 every month.

Jaha said she and her team are doing embarking on initiatives to bring down poverty levels in their communities and help empower women since they are the most vulnerable.

The 30 year old Gambian biggest motivation is her mother. Her mum passed away when she was fourteen. The young humanitarian has seen how her mother suffered and struggled in order to sustain their family.

The UN Women Regional Ambassador for Africa explained how she felt when she used to wake up at 5am every morning in the Gambia and saw women carry buckets of water on their heads.

Jaha Dukureh said the struggle is not only about telling people Female Genital Mutilation or Child Marriage is wrong, but about looking at the root causes of these issues and helping those involved and taking them out of such situations.

A campaigner against female genital mutilation, Dukureh is certain that a lot of women do not have choice to make against the practice since they are too dependent on someone to feed them and their children leading them to make some irrational decisions.

Jaha with the help of Safe Hands for Girls will provide trainings for these beneficiaries such as teaching them how they can invest their money and save the income generated.

She advised young Gambians especially young women to believe in themselves and know that everything in life is achievable. Taking example from herself, she said she never thought that she will attain such an accolade, but it has happen and for her to be the face of the biggest cosmetic brand in the world is something even her mother would not have ever dreamt of in life. Adding that everything is about resilience, not giving up, believing in oneself, and standing up for the truth and that if one knows what one is doing is right, one should not be afraid of anything or anyone. “This is what has guided me over the years. I hear a lot of things about myself which is not true and comments online which are false but at the end of the day, I am standing on my truth,” she said.

L’Oreal Paris is a French personal care company with its headquarter in Clichy and registered office in Paris. The company is the world’s largest cosmetics company concentrating on hair colour, skin care, sun protection, make-up, perfume and hair care.