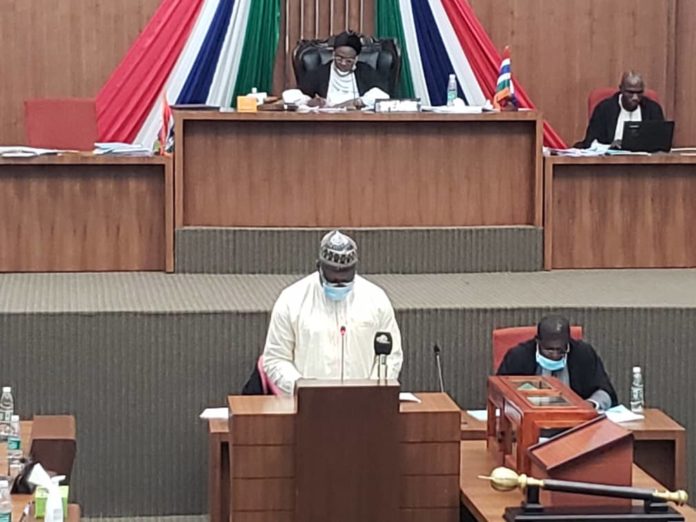 The Minister of Works, Construction and Infrastructure, Mr. Lamin Jobe, told the legislature that the Gambia generates at most D15 million from the Senegambia bridge on a monthly basis.

Mr. Jobe made this disclosure on Wednesday 1st July 2020, at the National Assembly, in responding to the question posed to him by the member for Kombo South, Kebba K Barrow.

Jobe said that the tolling at the bridge is temporary assigned to a team comprising staff of the National Roads Authority (NRA) and the Gambia Ports Authority Ferries (GPAF).

He said: “The revenue generated is deposited daily to an account in ECO Bank in the area. On a monthly basis, the revenue deposited in the ECO Bank, is transferred to a special account at the Central Bank of the Gambia, and when things were normal, this was between D9 and D15 million”.

He said that two toll plazas are currently under construction on the two entry points of the bridge and will be due for completion in the next two weeks, at present installation of computers and boom gates are ongoing, but two are completed.

He added: “The Ministry is working on the modalities of the operations of the plazas.

He added: “One option under consideration is to devolve the operation to a private sector on a PPP basis, which will be tendered and interested enterprises with total or majority local content be given preference.”

He said the goal is to ensure revenue generated from the tolls are secured for the maintenance of the bridge and the funding of other roads and bridges in the country.

Member for Upper Saloum, Alagie Mbowe, asked the Minister to confirm whether staff of the GPA Ferries are compensated for the work they do at the site. He said they are being used there for the collection of fares and no revenue is going to the ferries.

Omar Ceesay, Member for Niamina East, asked the Works Minister to explain the reason the ongoing construction of the Kudan-Banni road has been halted.

Minister Jobe informed the Niamina East Lawmaker that the said road project is under the NEMA Project under the Ministry of Agriculture, funded by the African Development Bank and the project according to their understanding, is designed to encourage private sector participation and empowerment of Gambian owned construction companies.

He added, “the fact remains however that only few Gambian companies own the necessary competence and quantity of equipment necessary for road construction. This has presented a great challenge to the said project. The Kudan- Banni road for example, is under delay, because the contractor is entirely dependent on hiring of equipment needed to implement the project”.

He however said that currently, 70 percent of the said road construction is completed and the contractor is presently on the site completing the outstanding works ahead of the rainy season.