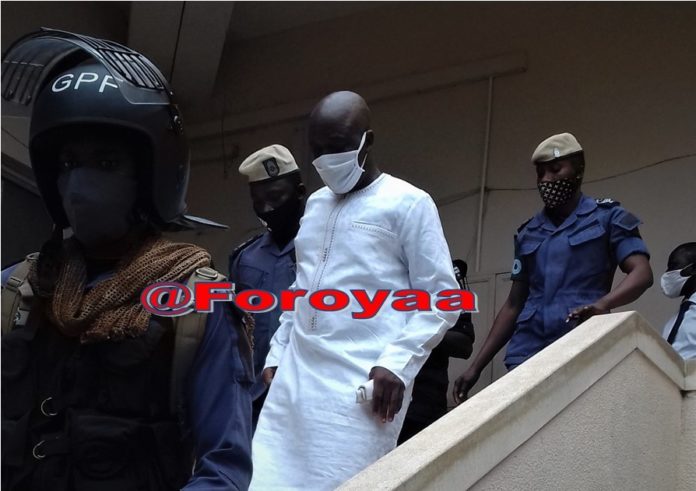 Mami Minteh, the second Defence Witness (DW2) in the ongoing criminal trial of Yamkuba Touray on Thursday told the court that her husband was sleeping at the time Ensa Mendy and Lamin Ndure were leaving their house on the day Jammeh travelled out of the country in 1995.

DW2 said the day Chairman Yahya Jammeh was travelling in June 1995, her husband (Yankuba Touray) woke up in the morning and prepared to go to work, but before he left for work, he told her to take out his uniform and shoes and iron the uniform before he closed from work because his boss Chairman Jammeh would be travelling.

“I did as he instructed me to do, Yankuba on that day closed from work around 3 pm,” the witness said.

The witness said when her husband closed from work; he (The accused) ate lunch, re-ironed his uniform and gave his shoes to Ensa Mendy to polish them for him.

“When the accused came from work on that day, he came with his driver Lamin Ndurr, his Orderly Ensa Mendy, Mariama Minteh and Hawa Minteh,” the witness told the court.

Minteh told the court that in those days whenever his husband closed from work, he used to pass by and collect Mariama Minteh and Hawa Minteh from their school.

She testified Touray went to his room and rested there after he asked Ensa Mendy to polish the shoes.

“When Mendy polished the shoes, he brought them and gave them to me saying that he is leaving and when Yankuba (The accused) gets up, let me give the shoes to him,” she said.

The witness said Ensa Mendy and Lamin Ndure then left the house whiles his husband was sleeping.

Minteh told the court that when the Touray woke up, he put on his uniform and waited for Jali Musa Sowe, but Jali Musa was not around at the time he (the accused) was leaving his compound.

The witness said the accused told her that he could no longer wait for Jali Musa Sowe and so he left.

She said when her husband left the house, she was watching movies with her neighbours at her house.

“I never evacuated my house with my family and went to Edward Singhatey’s house for a party,” the witness told the court.

She said her husband on that day came home around 12 midnight to 1 am and she spent the night together with him in their matrimonial room.

The witness said at that time, Ensa Mendy and Jali Musa Sowe did not have any mean communication facility.

DW2 said she never visited Edward’s house for a party in June 1995.

The matter was adjourned to Monday 10th August 2020 at 2 pm for continuation of hearing.