Why Gambia Couldn’t Qualify for the World Cup –The Mystery Explained!

By Sulayman Bah
Optimism reverberated in the face growing determination at Gambia’s participation in this year’s World Cup preliminary qualifiers.
The notion of going through the preliminaries, a stage lesser performing teams are meant to undergo should, by all indications, be of grave cause for worry for any concerned individual.
The Scorpions and coach Tom Saintfiet got classed in this category for their low ranking with the qualifiers proper the next episode for teams who’ve gotten past this hurdle.
Gambia’s involvement in this has been predictable – being one of the twenty-eight lowest ranked teams by the Confederation of African Football while another twenty-eight are handed byes based on rankings.
Later, draws held pitted the West Africans up against Angola, a tricky fixture by most reckoning. Over in Banjul, the euphoria reached fever pitch with majority convinced of an easy glide despite the South-central Africans’ football status on the continent. It’s profound to highlight they’ve been Africa’s representatives in the 2006 World Cup with Fabrice Maieco one of the integral players. While this team ended up bowing out but not without giving colonial masters Portugal a run for their money, a chunk of that outfit’s players had long reached their sell-by-dates. But the relevance of Angola in the African game hasn’t diminished in spite of a stretch of mixed results in the ensuing continental showpieces.
Tom Saintfiet branded the seeding against Angola a ‘tough’ one pointing out he is ‘not satisfied.’
‘I was hoping not to get Angola but it is a very bad luck for us ..,’ the 46-year-old said.
Interesting to note, at this juncture, the Belgian isn’t unaware of the scale of work at hand. Most would argued he had the quality at his disposal and only required to instil some dose of audacity in his regiment of players to dispose of the opposition. There are still pundits yet to come to terms with how Gambia got jettisoned out of the 2022 Qatar World Cup qualifiers.
The Antelopes have won just a single match, a friendly 2-0 triumph over Guinea-Bissau in June out of six outings one of them decimated before meeting Gambia. Of these encounters, they’ve drawn three including against, like Gambia, football-never-do-wells at senior level, Eswatini. Two of the remaining meetings were losses. Their margins in all these duels were slender, hinting of a solidified Jericho-like defence wall.
Of a fascinating insight though is, the discovery that Angola managed these outcomes with a squad comprising fifteen home-based players with a blend of a not-too-strong foreign-based contingent. 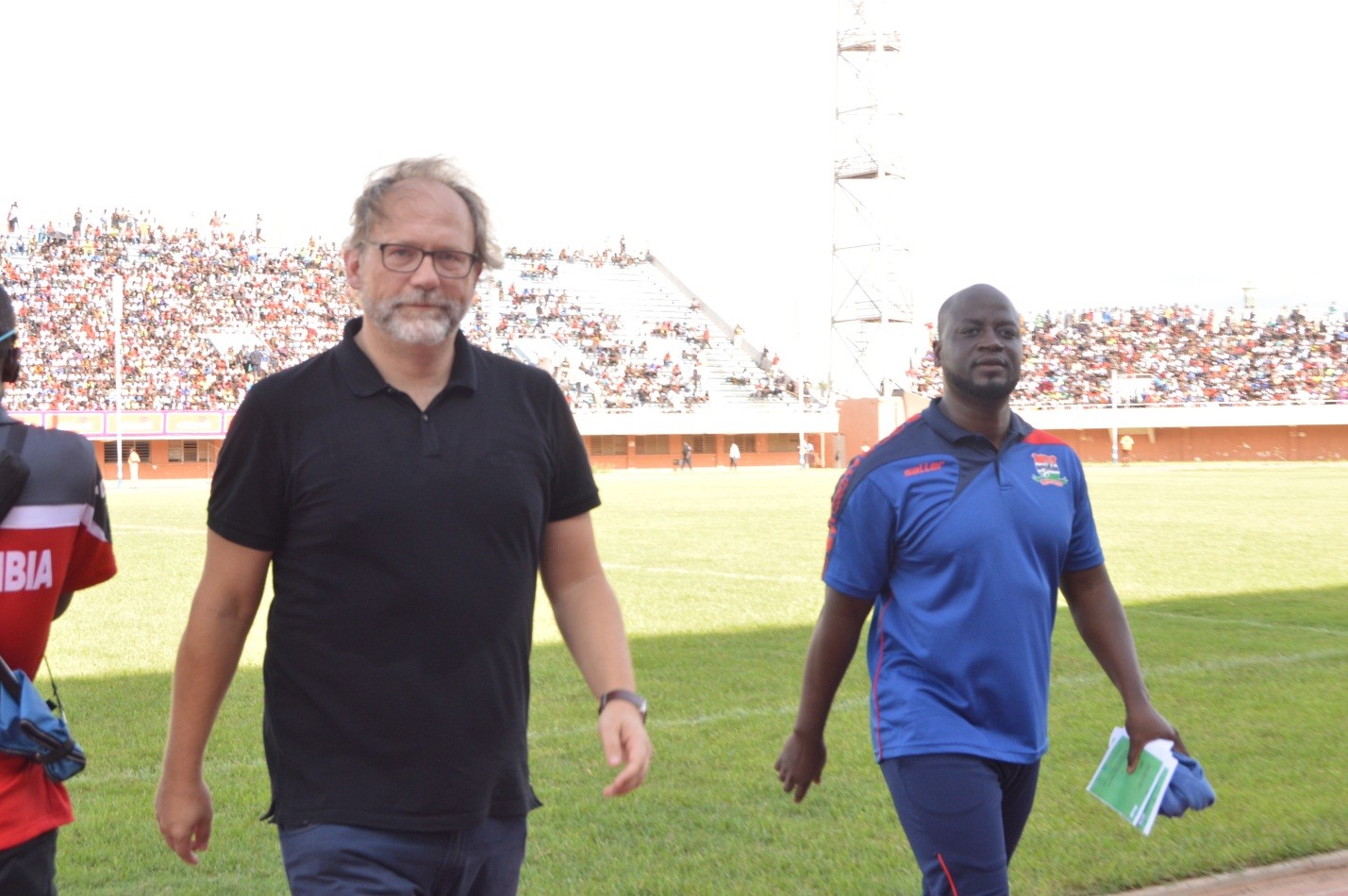 Unlike the Semlex-sponsored Gambian Premier League, Angola’s Girabola ZAP is one of the continent’s strongest domestic championships with a huge portion of Portuguese head coach Pedro Gonclaves’ roster drawn from 13-time title winners, 1 de Agosto.
A quick dissecting of this appears to give Gambia an edge on paper, before the game, considering its heavy roster of international players most of whom ply their trade in some recognised European clubs headlined by Sampdoria’s Omar Colley and Atalanta’s Musa Barrow.
Before this, it behoves to narrate the Scorpions have always been dogged by poor preparations worsened by lack of friendly matches, forcing each of the last eight hired coaches in the previous 13 years to use proper World Cup and African Cup of Nations qualifiers for some sort of experimentation, testing the avalanche of players abroad instead of an actual competition in a tournament.
This backwater seems to have been gotten over with for the very first time around by government and Gambia Football Federation with the early re-engagement of coach Tom Saintfiet’s services on an improved deal on the heels of some rare performances in the 2019 Afcon qualifiers in which the Scorpions finished third.
This is understandably reason for the recent hype that hovered around the team, with the wins over a then Afcon-bound Guinea Conakry and Morocco in Rabat a further enhancement to the team’s reputation.
As a result, the thirty or so thousand supporters who took space in every nook and corner of the stadium in the first-leg in Bakau September 6th had come with reverberating optimism.
The crowd, in appreciation of the strides Tom had registered within a short period, cheered on the Belgian prior to commencement of the clash who went on to maintain his stance of fielding eight defenders with three strikers – reliant on the theory a winning team is not to be altered.
The defensive fixture was a break away from long held tradition of attacking fluidity Gambia was slowly becoming known for during the reigns of previous coaches.
Game on, the stadium mood changed five minutes into play with Gambian players leaning on the back in their own yard to the consternation of the home crowd. 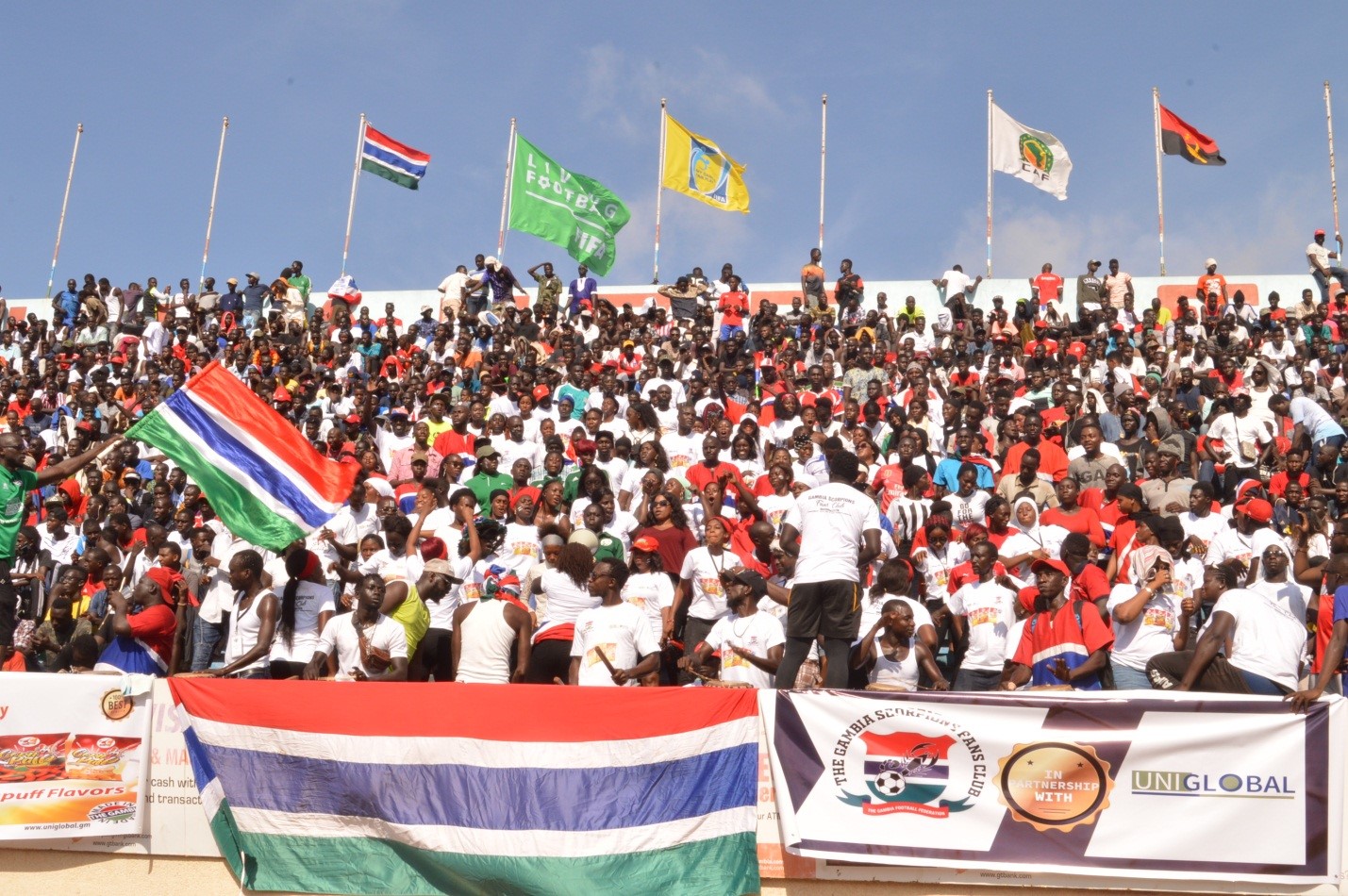 As though this wasn’t enough salt rubbed on a split wound, Willson raced the visitors ahead – a fragile advantage they held on to end of time. Saintfiet came under torrent of attacks from the press and fans for his game approach.
However, from a holistic point of view, and shoving aside the numerous blames and excuses that ensued, Gambian players were below par and lacklustre even by their own standards. 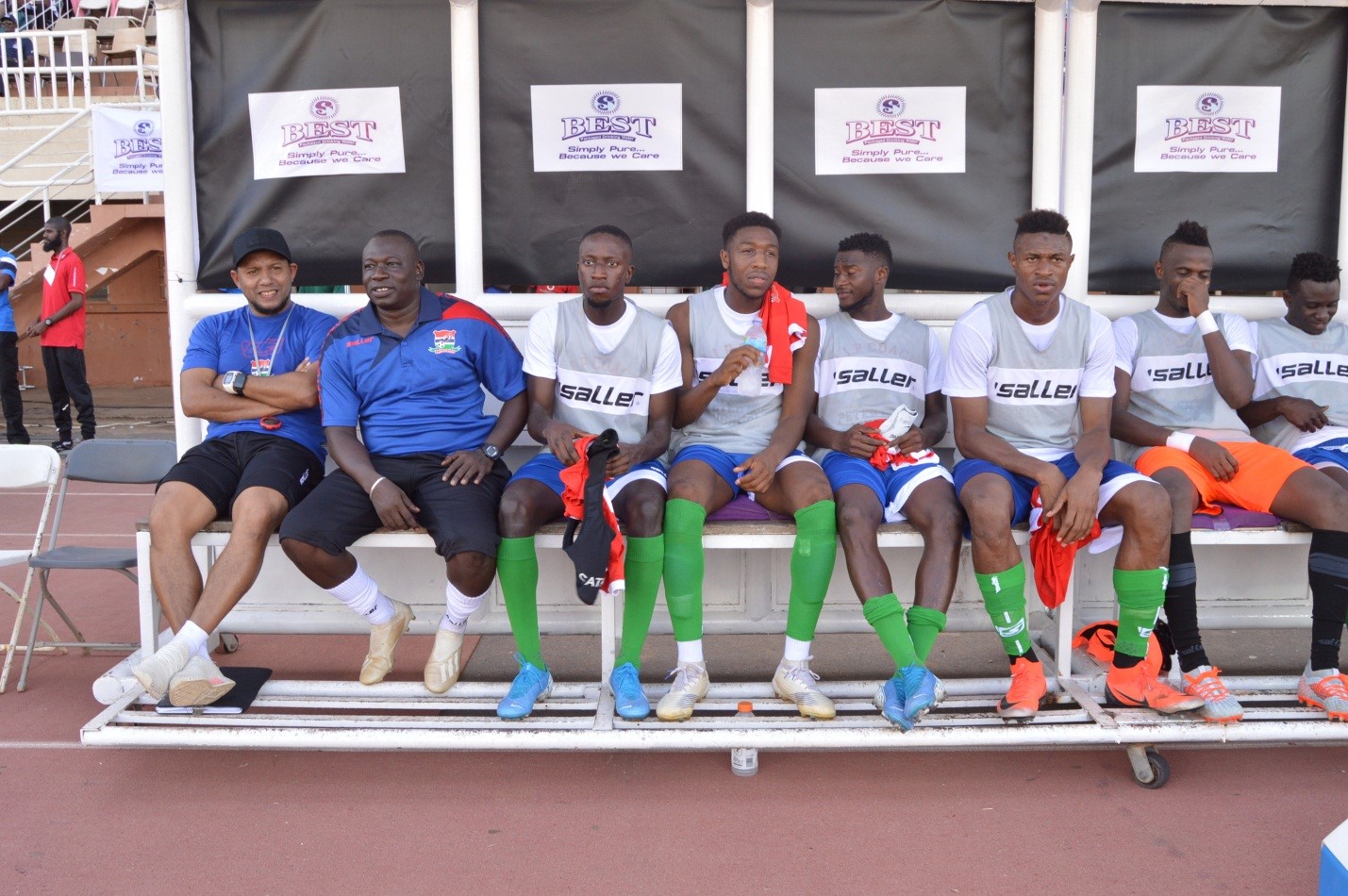 It’s an upheld belief the dynamics would have changed amid calls Hamza Barry is missed and hence the midfield’s lack of creativity. Barry played against Benin in the first-leg which ended a defeat. Before then it was Mauritania and a lowly Central African Republic, all wrapping up with the team counting losses. And besides, there are names enough to replace Hamza counting Ebrima Colley, Bun Sanneh and Yusupha Njie.
So, the absence or inclusion of Barry is no guarantee of creativity surging forward or a win. Gambia boasts of players of a better standing than Angola and still got whopped for all the qualities in its ranks. The usual lack of test games for the team that many have come to hide under, wouldn’t add up when put forward as an argument on this occasion. The Scorpions were simply not hungry enough on the international stage never mind the leadership of Sampdoria’s Omar Colley or the tenacity of Musa Barrow.
This was more telling of the players’ psychology in the second-leg in Luanda which unfortunately looks a widespread syndrome akin with Gambian stars. From inexperience, lack of burning desire and vigour, it all poured to the surface. And to consider this was a collection of Gambia’s very best, being rampaged, made it all the more excruciating to bear.
This lackadaisical attitude has cost coaches the Scorpions managerial helm before and threatens to, even now. Paul Put, now a disgraced gaffer for his involvement in a second match-fixing scandal, was the closest to qualifying Gambia. He was spoken of in exalted terms in a set out but walked out of the role labelled a fiasco in 2011.
Less than twelve months in charge, the same Put not only qualified Burkina Faso to the Afcon 2013 but led them to finishing as semis-finalists, bagging a Caf Coach of The Year nomination for himself in the process for his unprecedented exploits. 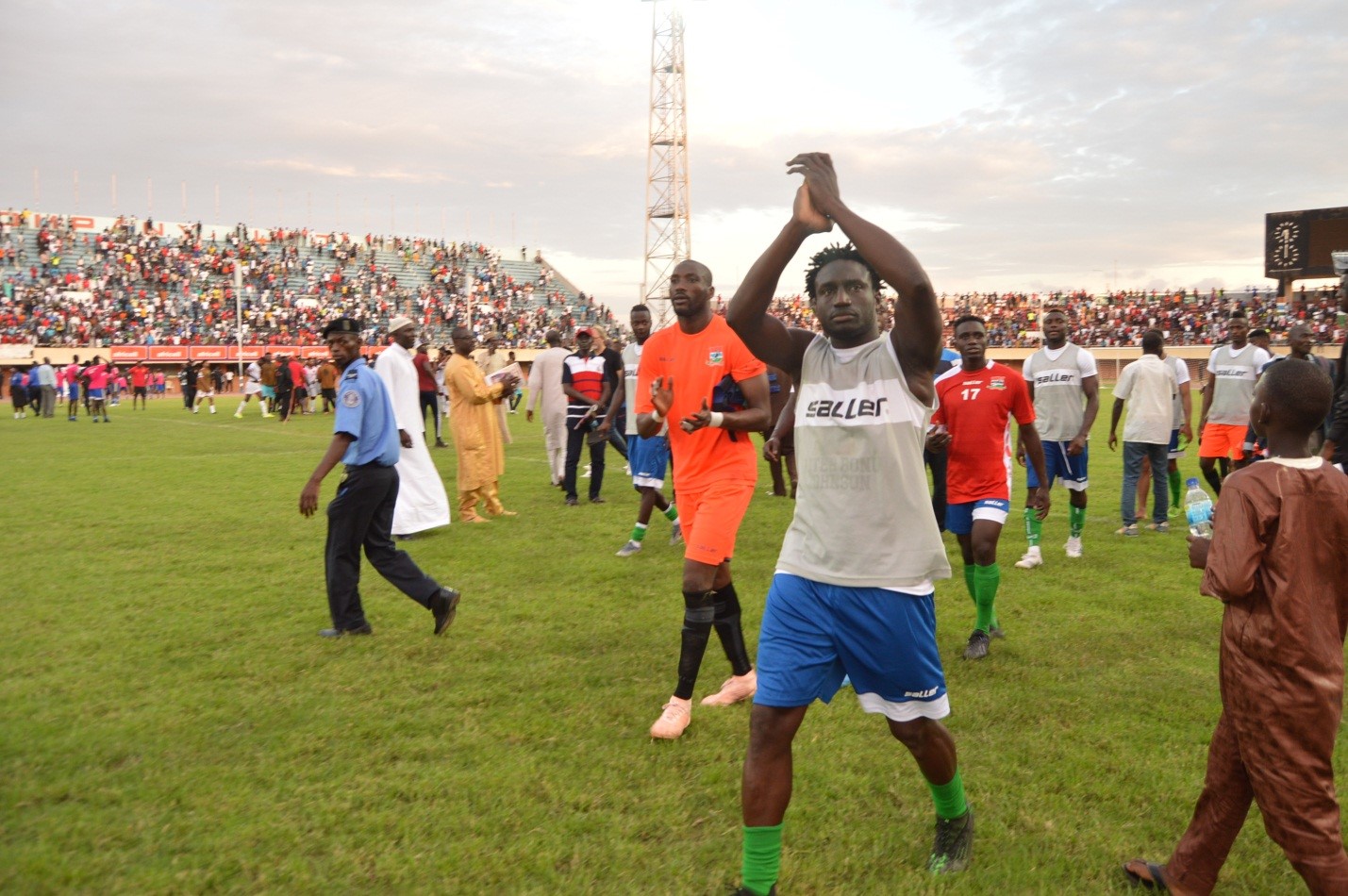 Before Put, Antoine Hey, Jose Martinez left the Gambia senior team coaching portfolio. Then Luciano Mancini, the late Bonu Johnson, Sang Ndong and Raoul Savoy followed suit leaving with their missions unaccomplished.
The usual line–obviously now cliché –offered by the GFF and ministry of Youth and Sports as explanation for sacking coaches is ‘for failing to qualify Gambia to the Afcon or WC.’
Many a nation would have qualified with the talent Gambia boasts of. Cape Verde, Madagascar, whose standout player is a peripheral in the Bulgarian Premier League and even Uganda or Kenya, are shining examples of teams who qualified without marquee stars and would have outdone the continent juggernauts had they had the calibre at the Scorpions disposal.
Luck counts in team draws and is somewhat of a determinant as to who goes through but in Gambia’s case, players’ perception towards matches requires not only orientation but a complete revamping. The nonchalant comportment should be replaced with hunger to succeed. The earlier this is sorted, the better before the Djibouti October 6th Afcon qualifier. For one thing, there are no minnows in the global game again.

By Yankuba Jallow Veteran Gambian journalist Ebou Waggeh passes away on Monday, 26th October 2020. He was among pioneer journalists at the Gambia Radio and Television...
Read more

By Makutu Manneh The National Independent Electoral Commission (IEC) has approved four (4) candidates from different political parties to contest for the position of Councillor...
Read more

By Mustapha Jallow  Residents of Nana Ba, Kumbanyi Fula and Kumbanyi Mandinka in Niamina West District, were on Tuesday urged to desist from violence and...
Read more
FOROYAA Newspaper is your premier Gambian community portal delivering news on politics, legal affairs and more. We provide you with the latest breaking news and videos straight from The Gambia and the rest of the world.