The Ward Councilors for Baja and Foday Kunda together with their Ward Committees, presented building and borehole materials for construction and rehabilitation of some public properties within their Wards. The presentations were held in Boro Kandakaseh and Brifu villages on Thursday 9th and Saturday 11th January 2020 respectively. 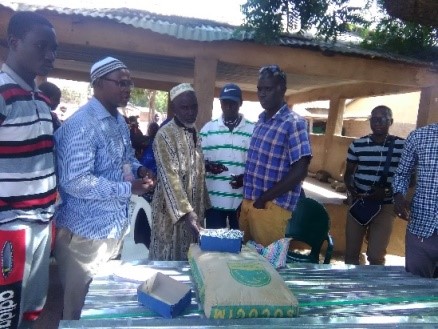 Councilor Garry said this is the fifth project he and his Committee implemented in less than two years since he was elected Councilor.

“This is my fifth project in less than two years since I became Councilor. My first project was a garden to the people of Manjang Kunda village worth D98,000; the second a hand pump rehabilitation worth D56,000 to Boro Fula kunda; another was a hand pump rehabilitation worth D76,000 for the people of Fatatenda and this particular one is the provision of building materials worth over D12,000,” Garry said; that all five projects were funded by the 60% return on all tax collected by Council from the Ward as indicated in the Local Government Act. He said the materials presented to beneficiaries of Brifu and Foday Kunda Ward, were fifty-two bags of cement, corrugated iron sheets, iron rods, paint, iron doors and hand pump equipment worth over D75,000.

For his part, the Councilor of Foday Kunda Ward Sarja Kanmateh said this was his first project funded from the 60% return on all tax collected by Council from the Ward as indicated in the Local Government Act; that this is the biggest project so far because seven villages are benefiting from it at the same time; that among these seven villages, four were given bags of cement, packets of corrugated iron sheets, roofing nails and paint for the rehabilitation of their RCH facility and other public places while the other three villages benefited from the provision of a hand pump equipment.

The beneficiaries express joy for a job well done by the two Councilors and postulated that they have and will never regret electing them as Councilors for their Wards.
On behalf of the CEO, both presentations were graced by the Director of Planning of the Basse Area Council Yaya Ceesay and the PRO Omar Drammeh.