Serrekund market is one of the biggest and busiest markets in the country, and all types of goods are displayed to attract buyers. However the market can be described as a no go area for both sellers and consumers, during the rainy season, when the pathway within the market are flooded with filthy runoff water. 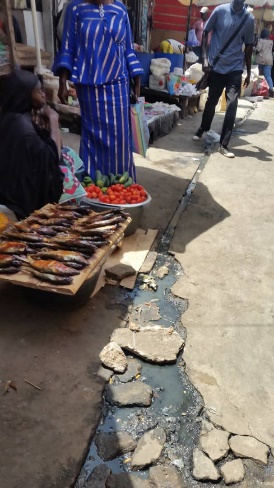 During a visit to the market on Wednesday March 5th 2019 by these reporters, some vendors indicated the dire situation of the market which needs urgent attention from the KMC.

The vendors indicated that during this time, they suffer from the dirty flood water, maggots, flies and foul smells from over flooded soakaways, which pollute the whole market. They call on the officials of KMC to renovate the market with utmost urgency, before the rains start. The vendors also called for increase space in the market, because they find it difficult to sell their goods; that as taxpayers, the authorities should look for a solution and help them reconstruct the market.

The vendors claim that a large chunk of their items perish during the rains; that they lose a large portion of their merchandise to flies, polluted water, and the foul smell that drives away potential clients who think twice before they buy their goods.

Awa Minteh, a charcoal seller raised the difficulties they are currently faced with at the market. Awa said some of the difficulties affect their sales. She alleged that thieves stole ten bags of charcoal due to security problems in the area.

“We lost ten bags to thieves. We called on the Municipal authorities to renovate the market and give us more space,” she said.

Sulayman Dukureh, who sells secondhand clothing, said both the vendors and customers do not feel comfortable during the rains. Dukureh said the movement of vehicles especially trucks, is a great problem for them; that this destroys their merchandise.

“During the rains, we encounter difficulties because we have to wait for the rain to stop before we start selling,” Dukureh said.

Madam Tuti Colley, another vendor called on Government to provide more shops or restructure the market to create enough space for them to keep their goods safely; that the market is the only place they depend on to feed their families, because their husband are jobless.

When contacted to shed light on the issues raised by the vendors, Isatou Bah, the Public Relations Officer of the K.M.C. appeals to the market vendors to cooperate with them; that they are also working towards the goal of meeting their needs. Bah said this is a gradual process and they are working towards this goal. Bah said renovation was made in other parts of the market. Bah said they are able to provide seven security guards; that recently, they have built a fence where for vendors to throw their garbage.