Vendors Question Their Fate, As Work On Trans-Gambia Bridge Advances

Vendors at the Transgambia Bridge have questioned what and how their businesses will become, as work at the said Bridge advances to finish.

The vendors who spoke to this reporter during his visit to see the state of work going on at the bridge on Tuesday October 16th 2018, asserted that before the construction of the bridge commenced, they were visited by the National Roads Authority (NRA), and some members of the Africa Development Bank (ADB) in what they called an Environmental and Social Impact Assessment (ESIA); that during that assessment, they were asked to express their views and concerns regarding the impact that the construction of the bridge will have on them and their businesses; that after the assessment, the team came back to inform them that the project will incorporate specific design features as a response to their concerns raised during their visit which will include the construction of two markets. The vendors lament that now that the bridge is almost complete, they are yet to know the sites for the two markets and the amount of money that should be given to them. 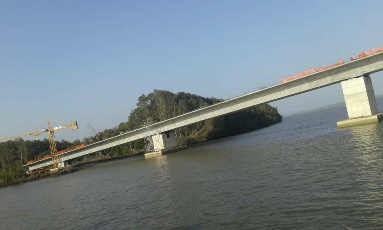 According to Alhagi Jobe from the Bamba Tenda side of the crossing point, he has spent the whole of his life at as vendor in that part of the country; that now that the bridge is about to be completed, the NRA should tell them where they will relocate them.

He however said the vendors are yet to know the sites where the markets will be built. “We want Government to help us, so that we can know our fate,” he concluded.

Ma Jeng who is another vendor at the Yelli Tenda side of the crossing point, expressed similar views, and further said that the best sites for markets will be were the tickets will be sold; that is because during the process of ticket buying, passengers can also have access to buy from them. He call on Government to help them know their fate, as the bridge nears completion.

Looking at the project document, one can realize the following:- “The project will affect:

The total number of Project Affected People (PAP) is 178. An Abbreviated Resettlement Action Plan (ARAP) which defines the framework of compensation and restoration of revenues for all PAP, has been prepared. The mitigation measures will include:

(ii)           construction of two new regional markets under the project to enable the 115 established traders continue their activities in an improved setting.

Given that there will be a lapse of time between the shutdown of the ferry and their relocation to new markets, a provisional amount of Euro 62,104 equivalent to three months average income, will be paid to the 115 traders. In addition to these mitigation measures, a provision of a lump sum of Euros 12, 674 will be made to assist the PAPs, including the established traders for their relocation on the new sites.

By Makutu Manneh The Gambia Armed Forces have promoted 448 soldiers to different ranks at its 1 Infantry Battalion- Yundum Barracks. The soldiers consist of both...
Read more
FOROYAA Newspaper is your premier Gambian community portal delivering news on politics, legal affairs and more. We provide you with the latest breaking news and videos straight from The Gambia and the rest of the world.