Gambia Transport Union (GTU) has expressed their disappointments with the Gambia Government for halting the queuing system agreement for trucks at the Ports in Banjul.

This development came on Monday, 7th December, 2020, when truck divers converged to protest at the Gambia Ports Authority (GPA) demanding Government to explain the reason behind aborting the queuing system agreement at the aforesaid Port. 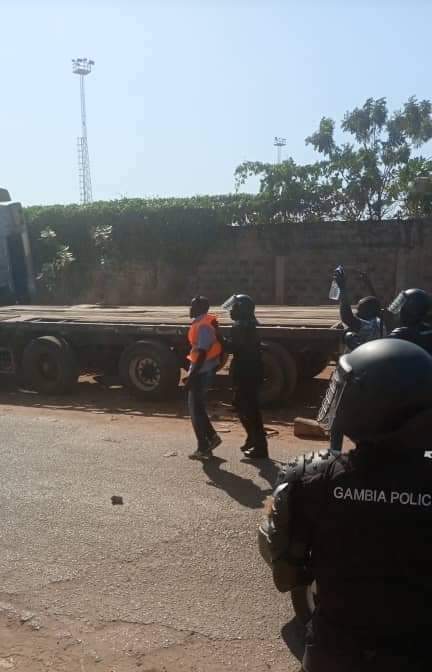 “We are very disappointed with what happened here today and we did not expect it but it is already done. We raise the concern to government through the Ministry of Transport, we agreed and they came up with guidelines which were to be implemented on the 3rd December 2020, but the Clearing Agents refused. Today we came and met the PIU Officers and they said they revoke everything,” he explained.

Ceesay said they came out to protest to make sure a solution is reached. He said they approached the PIU Officers and told them that they want to know what change their agreement and they told them that everything has been revoked. He said many people are working in the informal sector, feeding their families, without government knowing them.

“If you want to victimize those people, it will be a big cycle as far as the Gambia ‘we want’ is concerned’. We therefore want to know the motive behind it and why they made such changes. Some of the drivers were arrested and now we are liaising with our lawyer so that we can intervene,” he said.

Ceesay urged every sector to do their work accordingly, while telling the government to employ progressive means in the discharge of its duties.

Malick Ngum, Secretary General of Gambia Transport Union (GPU), explained they wrote a letter to the Ministry of Transport requesting for a queuing system to be introduced at the port for trucks.

Thus, the Ministry of Transport and GPA called for a stakeholders’ meeting where they all agreed to have a queuing system because it will ease up the traffic at the port and there will be no accidents, he added.

Mr. Ngum revealed that during the meeting, they agreed to implement it as a government policy and the GPA said on the 3rd December, 2020, the queuing system would commence.

Unfortunately, he said before the date, the clearing agents stood up and said the system will not be introduced.

He further revealed that the GPA called GTU for a meeting on the 2nd December, 2020, where they were told not to commence the queuing system on 3rd December until in two weeks’ time.

Momodou Lamin Sanyang, the Spokesperson of Gambia Ports Authority, told this reporter that the Government, represented by the Ministry of Transport, Works and Infrastructure and the Ministry of Trade, Industry, Regional Integration and Employment, wishes to inform the business community, Association of Clearing and Forwarding Agents and General Transport Union that the proposed ‘Queuing System’ has been suspended until further notice.

“Therefore the status quo in granting access to delivery trucks entering the Port will be maintained until a comprehensive review is conducted, taking into account the view of all stakeholders with the objective of enhancing efficiency in this important segment,” he said.

GPA Spokesperson said the aforesaid ministries solicit the understanding and cooperation of all parties, whilst every effort is being made to ensure efficient delivery of Port services.