The downpour of rain, has is a blessing for most if not all rural dwellers, as they embark on working for their livelihood through agricultural practices on their farmlands, during the summer. It is also the time when even domestic animals will rejoice in anticipation of naturally grown lust green grass in abundance and the availability of water everywhere, to quench their thirst, after seven months of scorch dry weather in search of food and water. 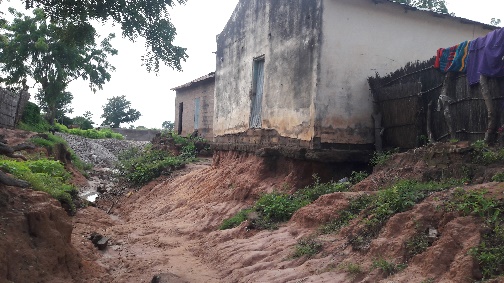 However, this is not the same with the people of the village of Mbapa Mariga, a border community in the Sabah Sanjal district of the North Bank Region. In this community, the erosive powers of the heavy downpours of the past years, has divided the village into two halves, making life terribly difficult for women to reach the central well, the men to access the central mosque and children to go to School.

Although very optimistic with their farm produce for this year’s season, members of the community are devastated with the deepening and widening of the gully that separates the village, caused by the massive erosion of the downpours. The gully stretches for more than eight hundred meters.

According to Omar Ngett, the Chairperson of the Village Development Committee (VDC), series of interventions by the natives and NGO projects were made to address the problem of this gully, to no avail. “We are totally devastated as the problem is worsening with the advent of every rainy season, and as the gully grows, it swallows any structures that comes its way. Our children and domestic animals are the most vulnerable especially during heavy downpour at night,” he told this Columnist; that this means they are helplessly waiting for disaster if no meaningful intervention is done. He call on Government, projects and philanthropists, to join the efforts of the National Environment Agency (NEA), and the NEMA project, in their continuous engagement for a lasting solution to their predicament.

Ngett applauded the efforts of the Local Primary School who bridged one side of gully with a concrete slab, to allow students to cross to the other side and attend School, and women to cross and fetch water, etc.

The Village Imam Morr Mbye, reiterated the same remarks as the VDC Chairperson. He disclosed that village elders and youth do not sleep during rains; that they stay alert to attend to any unforeseen circumstance. “We live in constant fear”, he told this Columnist.

Aruna Jobe, NEA’s Senior Program officer for Agriculture and Natural Resources (ANR), said the gully issue Mbapa Mariga village, has been highlighted in their baseline study report of the NEMA project, and subsequent reports and recommendations were made; that inadequate measures were taken over by time, leading to the current depleting situation in the village. “If you don’t act on time to avert environmental problems, you are likely to pay high costs in damage repair and control,’’ he warned; that immediate action is required to revert a hanging disaster. He recommended that Government and relevant stakeholders swiftly intervene and address the problem, and advised villagers especially children, to keep away from the disaster prone areas and stop construction along the gully.

Farmers in NBR Complain of Pigs Destroying their farms yields