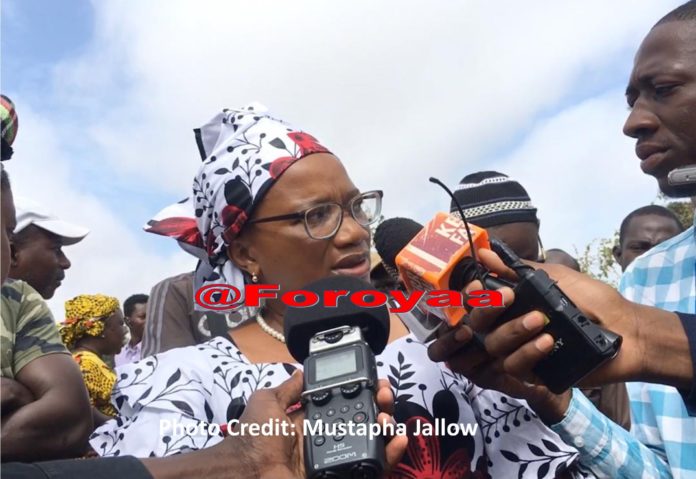 Residents of Sukuta Salaji have denied receiving any compensation from Government for their lands.

According to some of these residents, Government wants to take their land from them with the claim that it will be used in the public’s interest.

However, Buba Sanyang, Permanent Secretary at the Ministry of Lands said Sukuta Salagi was designated since 1997; that all the houses built within the said premises do not have regular documents from the Department Physical Planning, will be demolished; that those people with land at Sukuta Salagi were compensated. However, some of the families in Sukuta still complain that they have not been compensated and demanded their plots of land back.

On Tuesday Jnue 9th, many residents of Salaji came to Brusubi Police Station to show solidarity with those who were arrested and asked to report on bail.

Fatou Jaw Manneh, a resident who came to report on bail, denied Government’s claim that they were compensated. She said for over a decade, they have been battling with the State regarding the said disputed land.

“This is the unfairness and injustice that we as ‘Sukutarians’ are going through. They said they are going to conduct another exercise, but I want to say that we will carry out the same thing to tell them that demolition will not take place,’’ she stressed.

Ms. Jaw Manneh advised residents and land owners in Kombo, to save their landed properties and not to allow anyone to take their compounds from them.

One Ousman Bojang said he was compensated with a plot of land, but was surprised to find out that the place allocated to him was someone’s property; that when he visited the said plot, he met someone who was constructing on the said land who also claimed ownership. Bojang threatens to sue Local Government officials on the injustice meted on him and his colleagues.

Lamin Cham and Saikou Bojang made similar remarks and said the places where they were allocated belong to others.

Letters from the Ministry of Local Government and Lands, were shown to this paper by some individuals confirming that the plots belong to them. One of the letters from the Ministry of Lands was dated 29th October 2018. The said letter was a Physical Planning Report issued to Lamin Cham of Salagi Layout Extension. According to the said letter, Mr. Lamin Cham of Sukuta applied for confirmation from the Physical Planning office regarding his plot of land at Salagi Layout Extension; that upon inspection, confirmed that his plot of land was recognized as an existing plot and was therefore incorporated as such in the layout; that in that regard and as per the Ministry’s approval, Mr. Cham was to retain the said plot of land which is now sub-divided into thirty-seven portions.

The letter was signed and stamped by one Kebba Ceesay, Director at the Department of Lands.