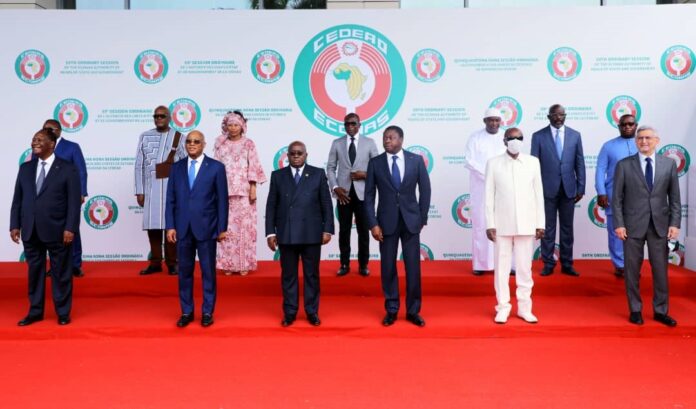 State House, Banjul, 20th June 2021: H.E President Adama Barrow attended the 59th Ordinary Session of the ECOWAS Authority of Heads of State and Government held in Accra, Ghana. The event brought together leaders of the ECOWAS region to deliberate on issues of trade, regional integration as well as peace and security in the region.

In his welcoming statement, H.E Nana Addo Dankwa Akufo-Addo, President of The Republic of Ghana and current Chair of the ECOWAS Authority of Heads of State and Government, called on leaders of the regional bloc to continue to strive towards fostering peace and stability in the region. He cited the ongoing situation in the Sahel and the recent Coup d’etat in Mali as issues of concern to the bloc. President Akufo-Addo called for the region to concertedly address these issues.

The ECOWAS Chair, President Akufo-Addo also highlighted the impact of the coronavirus pandemic on the bloc especially in the areas of trade, industry and employment.

Several other issues were also highlighted during the opening ceremony by the key speakers including H.E Mahamat Saleh Annadif, Special Representative of the UN Secretary-General for West Africa and the Sahel -UNOWAS, who commended the Gambia for the peaceful nature of the ongoing voter registration process in the country. H.E Mahamat Saleh Annadif went on to urge all relevant parties to collectively work on a consensus on the Draft Constitution of the Gambia and the just concluded Truth Reconciliation and Reparation Commission- TRRC in The Gambia, which is expected to submit its report to the Government.

On measures geared towards enhancing response to the Covid-19 pandemic, ECOWAS leaders recognised the need to prioritize the manufacturing of vaccines on the African continent by African Scientists. The leaders also called for increased prioritisation of security in order to protect strategic investments on the Continent.

Investing in the empowerment of women and the youth was also a priority recognised by delegates at the opening ceremony of the 59th ECOWAS Summit.

The key outcomes of the Summit in terms of deepening and strengthening regional integration amongst member States included the signing of a Military and Technical Memorandum of Understanding (MoU) between the Republic of Guinea and the Republic of Senegal. This was applauded as a great stride towards the reopening of the border between the two countries, which is key in regional trade. President Akufo-Addo commended the two countries for signing the MoU noting that it was a positive step towards deepening regional integration in West Africa.

As a champion of regional integration, President Barrow discussed the border closure between Guinea and its neighbours with President Alpha Condé, during his recent visit to Guinea. The signing of the MoU was therefore a welcoming development for His Excellency.

Following the opening ceremony, the ECOWAS Authority of Heads of State and Government proceeded in a closed-door session to review reports on Mediation and Security, ECOWAS Single Currency Programme, Institutional Reform amongst other issues before deciding on the date and venue of the 60th Ordinary Session of the authority.

During his briefing session with the media on the recommendations and outcomes from the closed-door session, the President of the ECOWAS Commission, H. E Jean Claude Kassi Brou, said the Summit has agreed to set the mandatory covid test at $50 and invited all member States who have not implemented this decision to do so. On security matters, H.E Claude Kassi Brou reported that the ECOWAS Authority insisted on the implementation of the Regional Security Plan that was approved in September 2019 to tackle the pressing security issues in the region. He also said the security in the Gulf of Guinea was extensively deliberated on and the ECOWAS Authority was firm on making sure that the measures taken to secure the Gulf of Guinea are fully implemented.

Another important consensus was that ECOWAS should go through an Institutional Reform and The ECOWAS Authority Chair, H.E Nana Akuffo-Addo was tasked to lead this reform process.

As this year’s Summit coincided with the 46th anniversary of the founding of ECOWAS, the regional bloc is committed to a reform process that will strengthen its operations and procedures in order to help attain its regional integration goals and objectives.