Sare Ngai, a business hub in the Upper River Region, is facing economic loss due to poor condition of the roads in the area.

The town has great business prospects that offer the opportunity for hundreds of traders in and out of the country to sell their goods.

But due to the poor condition of the road, business enthusiasm is dwindling.

Many believe Government should consider and construct the road that connects the weekly business centres to the main highways because they are daily sources of revenue for the state and the communities. 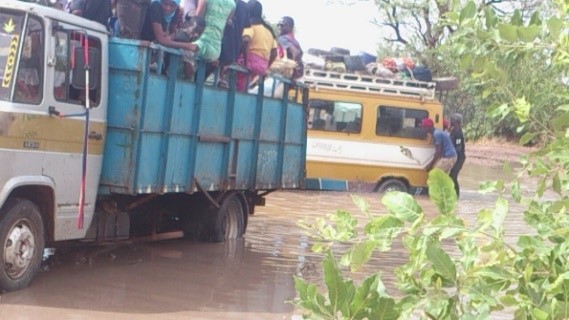 Business at the Sare Ngai weekly market is becoming unattractive for vendors due to deplorable road condition in the area.

Approximately six kilometres of road that links Sare Ngai to the Laminkoto – Pasamass highway from Sare Tenneh junction is fraught with extreme danger and many drivers are no longer willing to take the risk of carrying people to the weekly market day.

Revenue collected by the council on every weekly market day at Sare Ngai is estimated at D10,000. This could drop significantly due to the absence of vendors at the weekly market because of the poor road condition.

This reporter visited the area on one of the weekly market days on Monday and found a significant number of vehicles stuck in mud water on the said road on that particular day.

Some vendors and drivers who were trying to push their vehicles out of the mud-water, said a journey on the road to Sare Ngai is now a nightmare for businesspersons and travellers, especially those using the road frequently.

Who Is Qualified To Be Registered As A Voter?