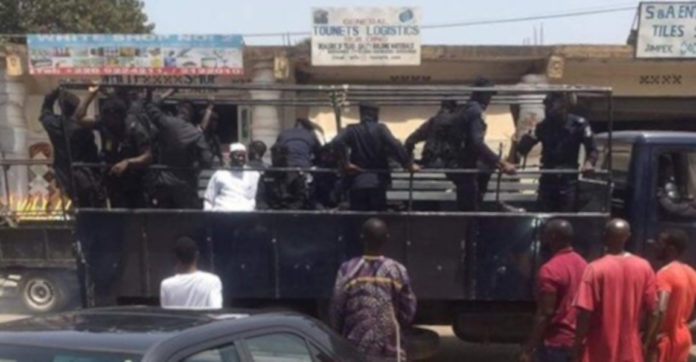 Gambian Police on Saturday released an Imam, who was detained overnight at a Police Station after he was arrested for attempting to lead congregational prayers at the Jimpex mosque.

His wife – Penda Bayo told Foroyaa: “My husband was released on bail today (Saturday) at 12pm.

Imam Yankuba Njie (alias ‘Yakuba’ Njie), according to sources close to him (imam) was picked-up by state security agents after they received information that he was about to lead Jummah prayers.

Sources added the imam was put in a truck and taken away by personnel of the Police Intervention Unit.

Penda Bayo remaked: “I was at the market, when I received a phone-call indicating that my husband was under arrest for attempting to lead Juma prayers.”

Upon arrival at home, at 2pm, she added: “I immediately phoned the imam (husband) and he explained what had happened.”

She explained that her husband was taken to PIU headquarters at Kanifing, where he was briefly detained before being moved to Kanifing Police station around 4pm.

At the time of going to press, the imam was not granted bail but sources close to him said elders from Giboro were working on securing bail for him.

Police spokesman, ASP Lamin Njie said: “We can confirm that today at the jimpex mosque, Police arrested an imam for failing to adhere to the emergency powers regulations on closures of public places of worship.”

The worshippers were also dispersed, he added. He said the matter is currently under Police review.

The arrest of the Jimpex imam is preceded by the arrest of two imams from Brikama and an Imam in Jarra few weeks ago for also leading Friday prayers.