Bakary Kujabi, alias Seffo, and Ismaila Bah died during the incident. Reports further indicate loss of lives and serious injuries sustained from gunshots between the PIU and villagers. At least four other civilians sustained injuries and ten PIU personnel are reported injured in clashes between PIU personnel and protestors. They have been rushed to the hospital for medical treatment.

Yesterday morning when some trucks came to the mining site at Faraba Banta, they were intercepted by the villagers who insisted that mining must stop because it is not in the interest of the community but the vehicle drivers proceeded to the Site. Early in the morning of Monday, the villagers realised that there were some vehicles that came and mined.

Our reporters who visited the scene, indicate that some youths gathered on the highway in order to stop ‘Julakay’ Company’s trucks from entering and leaving the village, loaded with sand. PIU Officers stationed in the village, approached them to calm their nerves, only to see reinforcement of more PIU Officers who arrived and started shooting at them. The youth who spoke to our reporters indicate that they were armed with only sticks and stones to defend themselves from the live bullets of PIU Officers, who shot at point blank range and killed two of their own.

According to the youth protesters, this is what broke the camel’s back; that the fighting ensued for several hours amid chasing, stone throwing and firing of live bullets, leaving two people dead, one in a critical condition and three others seriously injured.

“We were sitting on the road leading to the site and we were even chatting with the PIU officers stationed there. We were chatting and talking with them nice without any problem until they brought reinforcement. When the reinforcement arrived, they didn’t ask or talk to us instead they began firing at us life bullet that caused the instant dead of two youths. We weren’t armed and we came there peacefully to sit on the way going to the site and not to create any problem but the police opened fire at us” they said. 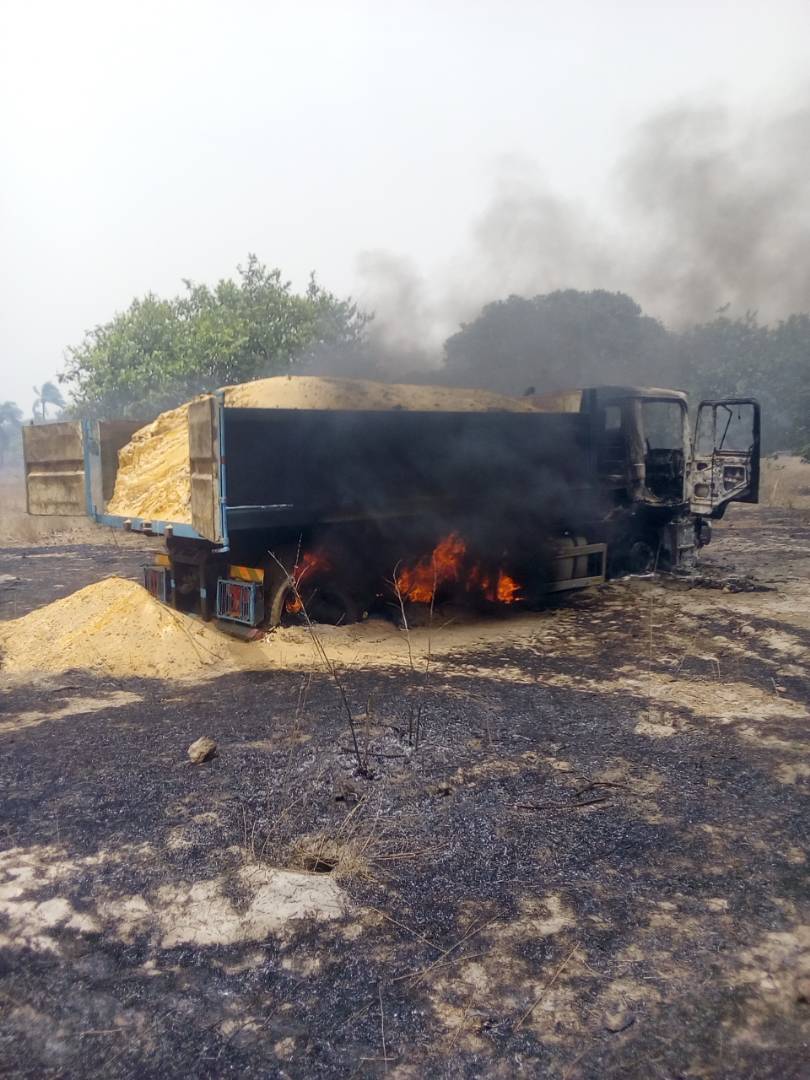 These reporters saw the charred remains of three trucks and two mechanised shovels commonly referred to as bull dozers. The newly constructed house for PIU personnel was razed to the ground by the rampaging youth of the village. Several compounds of alleged collaborators were all burnt to ashes, by the rampaging youth.

Meanwhile Momodou Drammeh, the Public Relations Officer at Edward Francis Small Teaching Hospital (EFSTH), confirmed the death of Bakary Kujabi and Ismaila Bah, both youth protesters from Faraba Banta village. PRO Drammeh disclosed that they received four people who are seriously injured but have been hospitalised. The PRO said he only knows of four people injured as at the time he was talking to our reporter.

“It might be more than this and they might be taken to various hospitals in the Kanfing Municipality or Brikama,” he remarked. The two corpses were taken to the mortuary at the time he was talking to this reporter.

Families of the victims were seen at the hospital in their numbers, speaking openly against what happened. Blood stains marred the floor of the accident and emergency room.

At the gate of the mortuary, family members of the victims openly wailed and wept for the loss of their dear ones as the mortuary attendant confirmed to this reporter, that he received only two corpses. In a related development, a journalist by the name Pa Bojang who works at a radio station in Brikama, is said to have been arrested by officers of the PIU, during the protest and taken to the Brikama Police station for questioning. These reporters can confirm seeing him at the Police station in Brikama, though they were being denied access to him.

The incident occurred in the wake of refusal by villagers to accept ‘Julakay’ Company mining sand in their lands before the National Assembly’s Select Committee complete their investigations and make final recommendations to Government. Villagers who spoke to these reporters indicate that the NA Select Committee on the Environment who visited them less than two weeks ago, did not complete their investigations and final report to Government. ‘Julakay’, however, proceeded to advertise and re- commence sand mining in Faraba Banta.

Share
Facebook
Twitter
Pinterest
WhatsApp
Previous articlePresident Barrow Regrets Loss of Lives in Faraba, Suspends all Mining Activities
Next articleINVESTIGATIVE: The Untold Story of How Gambia Lost 18 ‘Promising’ Athletes to a Circle of Abscondence in Just Little Under 20 Years
- Advertisement -