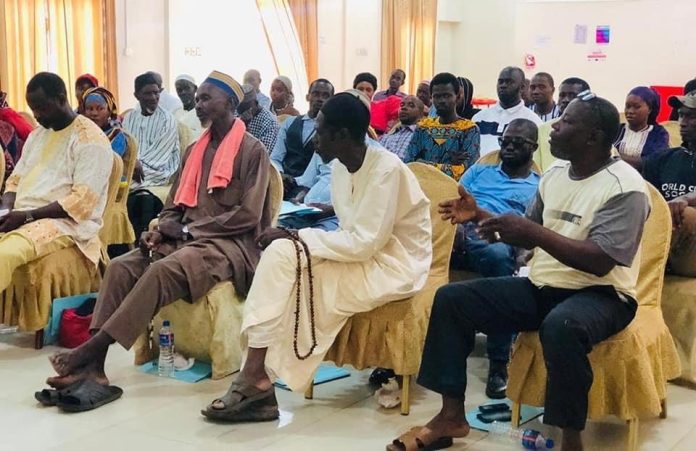 Tubanyo Sowe, a native of Sare Musa at Jarra West District in Lower River Region (LRR), on Thursday told officers of the National Council for Civic Education (NCCE) that The Gambia will remain undeveloped if corruption is not addressed in the country.

“Most of our Village Development Committees (VDCs) are ineffective because they are not transparent or accountable to their people. So, if corruption is not addressed, our country will never develop,” remarked Sowe, a 54-year-old participant.

Sowe made these remarks on 28th July 2022 at an interface dialogue at Mansakonko Conference Hall in LRR, during a day-long session with community members under the topic: “Interface Dialogue Between Decentralized Structures and Grassroots Political Actors”.

The event was organised by NCCE and supported by the UN Peace Building Fund (UN-PBF) through UNICE. The dialogue was aimed at enhancing mutual understanding, tolerance, peaceful coexistence and collaboration among local authorities and political actors at the grassroots ahead of the upcoming 2023 Local Government Elections.

But while participating in the program, Sowe said when an economic crisis hits a country; corruption is the course, saying there is a lot of corruption in government departments.

He added that some officials think that everything belongs to them and their families, adding that such practices have led to conflict in countries, which is not good for citizens because it makes their lives miserable.

Sowe therefore called on President Adama Barrow to introduce tough measures with regard to corruption against ministers, senior staff in government departments and even the National Assembly members.

He described some ministers and National Assembly members as dishonest, who always snatch away most of their development opportunities from them and either give it to close families and friends.

“Most of our ministers and National Assembly members are not honest: Seriously, they are not,” Sowe accused.

Neneh Isatou Jallow, a native of Jarra Soma and senior member of the Inter-Part Committee, asked young people to come out and fully participate in Gambian politics, while urging them to desist from unnecessary complaints.

She went on to call on citizens to elect competent candidates into office and do away with voting based on friendship or tribe.

Seedy Saidykhan, a participant, said there are a lot of right violations in Gambian politics and this is the reason they are afraid to take part in the current politics.

Kebba Marong, the Alkalo of Jenoi, advised citizens to change their attitudes and support any government that comes into power to ensure the country’s development is achieved.

“Let’s put our parties aside and put the interest of the country first,” he said.

He said a lot of Village Development Committees (VDCs) are dormant and that if community members are not satisfied with their work, they should write to their area councils to dissolve them.