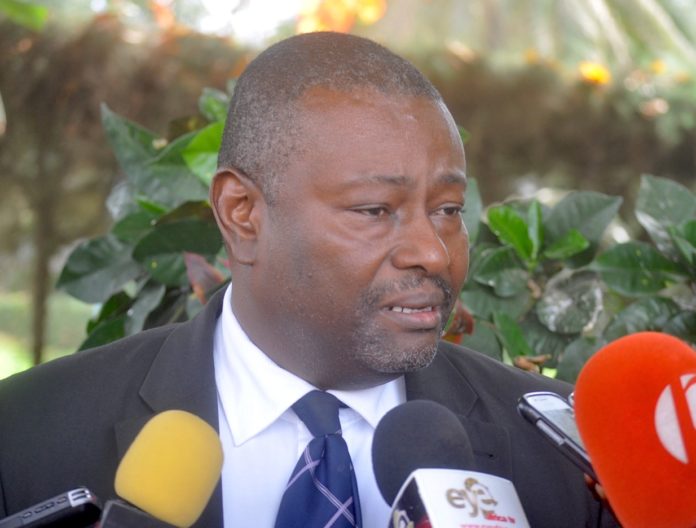 Emmanuel Daniel Joof, the Chairperson of the National Human Rights Commission (NHRC) on Friday called on lawmakers to advocate for the Commission’s independence.

Joof together with Commissioner Imam Baba Leigh and Executive Secretary of the National Human Rights Commission (NHRC) appeared before the National Assembly committee on Human Rights and Constitutional Matters on Friday, 5th June 2020 to submit their annual report.

The National Human Rights Commission Act was enacted in December, 2007 for the promotion and protection of Human Rights in The Gambia.

He called on the members of the Committee as well as the whole National Assembly members to become advocates for their independence from the Executive and also to exert pressure on the Executive to ensure that their recommendations are always implemented by them.

He said since the establishment of the Commission they have done several things including investigating cases, receiving complaints and made recommendations, formulated standard operating procedure, rules of procedure for complaint handling and handbook for Commissioners and their 24 staff.

“Whenever we say human rights, the first thing people’s minds go to is homosexuals (gay and lesbian). There are people who are engaged in trivialising human rights in The Gambia,” Joof said, as he rebutted a publication on Friday wherein it was mentioned that the Commission urged Government to protect gay rights. Joof said the Newspaper misquoted him adding the Commission stands to protect people’s human rights including cultural rights.

“Human rights include cultural, economic, political and social rights, among others. People should not trivialise it into gay rights,” he said.

Commissioner Joof’s Commission became operational in February, 2019 when its five Commissioners were appointed by the President of the Gambia following a rigorous consideration and confirmation process by the National Assembly.

Section 33 of the National Human Rights Commission Act requires the Commission, at the end of each year, to submit a report to the National Assembly on its business and operations during the preceding year.

The report, among others, is aimed at evaluating the ways in which human rights in The Gambia have been upheld, steps taken by the commission to promote and protect human rights, including the findings of individual complaints investigations and recommendations made by the commission.

Joof said the Commission recruited their staff in August 2019 including the Executive Secretary.

“The Commission has just fulfilled its statutory mandate under section 33 of the Act establishing it, which is to submit its Annual Report,” the Human Rights and Constitutional Matters Committee said.

“The National Assembly is the organ of the state best place to give effect to the promotion and respect for Human Rights, take practical measures to prevent abuses, and to ensure that the law provides practical means through which remedies may be sought for alleged Human Rights violations,” he said.

She said the NA in June 2018 established a select Committee on Human Rights and Constitutional Matters to act as a catalyst in the realisation of the promotion and respect for human rights in The Gambia.

Furthermore, she said considering the importance and premium attached to the promotion and respect for human rights and its value, the NA through its Standing Orders transformed the Select Committee in to a Standing Committee in September 2019 few months after the coming in to operation of the Committee.

“This means that the Standing Committee is now a permanent structure within the National Assembly Committee system,” he said.

He said the commission is one of the principal partners of the Standing Committee, and the report of the Commission submitted will help the committee in its work as the apex oversight institution in The Gambia.

She said the report presented to them by the NHRC will be considered by their Committee and the Plenary of the National Assembly will be advised accordingly.