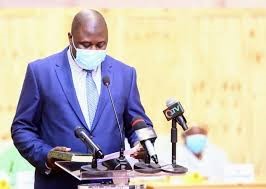 For some lawmakers in Gambia’s national assembly, bleaching ones skin is by choice and barring that from that person is a violation of his or her human rights.

But this view was not popular to majority of lawmakers in Banjul last week at the national assembly as they frowned upon Government’s attempt to repeal a law decreed by the 22 July Junta in 1995.

What is the bill?

The Skin Bleaching (Prohibition) Repeal Bill, 2020 was presented before the national assembly in June and the debate on the merits of the bill happened on Thursday, last week.

Exiled and former Gambian President Yahya Jammeh and his co-coup plotters decreed the law in 1995, decree number 65. The decree was aimed at banning the importation, sale, possession and use of skin bleaching in The Gambia.

The repealing of the 24-year-old law sponsored by current Government of President Adama Barrow came after three prominent Gambian lawyers (who were hired to review the country’s laws and recommend to Government the actions that should be taken) recommended to the Government that the Indemnity Act, False Publication and Broadcasting law and the Skin Bleaching Act among others, should be expunged from the country’s law books.

The new attorney general and minister for justice, Dawda A. Jallow, informed the deputies that the law came into force in January 1996, but was never brought before parliament for members to debate on the pros and cons of the law.

What are the proponents of the bill saying?

Four lawmakers who spoke after the bill was moved by Justice Minister Jallow supported it.

Member for Jimara, Alhagie Sowe who seconded the motion, opined that the bill has no use in the country since no one has ever been convicted since it came into force.

Nominated member, Majanko Samusa and member for Upper Saloum, Alhagie Mbow, all supported the bill and emphasized that it should be the choice of a person to bleach or not.

Samusa said The Gambia is a democratic country and they shouldn’t make people’s life difficult.

“I think this must be left to the people to choose,” Mbow said.

Member for Serrekunda, Halifa Sallah, said it is their duty to make laws on the basis of the interest of human beings, national interest and their conscience.

Sallah said it is a principle that a law that cannot be enforced is not a law and the matter at hand is not an issue of race, but that of socialization.

He said they must not negate the fact that bleaching is harmful to health, but where they cannot enforce a law they can educate.

“There is no doubt that the culture has created a mentality, a mindset of beauty which through socialization has been injected in men and women in Africa. And from birth that day, that baby is consigned to an inferiority or superiority by virtue of appearance. There is absolutely no doubt that the chemicals we use for the bleaching of the skin would be harmful to a baby that you suckle,” Sallah said.

But Sallah said they cannot battle the ill without battling the mindset, referring to it as acculturation. He recalled that when the skin bleaching law was enforced some years ago, Immigration Officers were arrested and detained.

“Who knows what happened to them? When you make these laws, you detain people, can you imagine what could happen to that individual and you don’t take that person to a court?” he questioned.

The veteran politician said such laws could lead to one arresting somebody because he wants that person and exploit the person because the person fears that if the law is implemented, she will be brought before the court.

“This law cannot be enforced and it can lead to abuse, it has led to abuse and that is why it should be repealed,” Sallah said.

Member for Brimaka North, Alagie S. Darboe, said there was need to repeal the law. He said nobody at the assembly was pushing for the promotion of skin bleaching in the country.

A view all members will later agree with during the debate.

Banjul North lawmaker, Ousman Sillah said the issue is on applicability of the law. As the chief health advocate in the assembly, Sillah like all members noted that the health implications of skin bleaching are numerous, but he indicated that the law is discriminatory.

He said for over two decades the law has been a cosmetic tool in the law book of the country and as such, repealing it will do no harm.

Sillah gave examples of alcohol drinking, cigarette smoking etc. which people are practicing daily in society yet the acts have not been criminalized. He thus called for more education to enlighten the masses about the harmful effects of skin bleaching and criminalizing it.

Njia said she was disappointed and ashamed that majority of the lawmakers were against repealing of the law, saying it was surprising that members who in the past said certain laws were bad, were now busy defending the retention of those laws.

Madam Secka on the other hand said whether the law is repealed or not, people will continue to bleach, even if it is expensive.

What are the opponents of the bill saying?

Like every bill before the assembly, opposition always exists. For this bill, majority were opponents. The pace setter was Busumbala lawmaker, Saikouba Jarju who said his conscience does not allow him to vote for the prohibition of the bill.

Another opponent, Sainey Touray, Member for Jarra East, argued that it did not require much intelligence for people to know whether skin bleaching is good or not, describing it as skin erosion.

Touray said the chemicals used on the skins are harmful to the body.

“And anything that is harmful must be nipped in the bud,” he said.

According to the Central Badibou lawmaker, the crafters of the decree had good intention and they should rather improve on the law than repeal it.

Sulayman Saho likened the prohibition on cannabis smoking to the law on skin bleaching; saying people have the ‘right’ to smoke but the law bars them from doing so.

Omar Ceesay, Naimina East lawmaker said his constituency asked him not to support the bill.

However, Ceesay argued that unless other social laws like cannabis smoking, FGM, etc. that bar the ‘rights’ of others who want to practice them are brought before the assembly for review, he cannot consider the bill.

Amul Nyassi, Foni Kansala deputy and Sunkary Badjie, Foni Berefet deputy too did not support the repealing of the bill.

Badjie called for a solution, for either amendment of the law or a new one be introduced, which Nyassi supported and noted that the law has good intention which is to protect women from harmful practice and they must not repeal it.

For Madi Ceesay, Serrekunda West deputy, the onus lies on the government of the day to enforce the law and it is not their business as lawmakers.

He said the executive have to find ways to enforce the law, no matter what it takes.

Justice Minister Jallow countered the assertion made by some lawmakers that if the executive fail to enforce laws is their weakness. He assured them that the government has all the apparatus to enforce the law.

However, Jallow said the practical effects of enforcing the law on society should also be considered.

“So is not a weakness on the side of the executive,” he said.

He opined that considerations were made after the law was passed which was never considered before it was passed.

Jallow added: “If this is a transitional government, we say we are trying to remedy and correct some of the mistakes of the past, we believe this is one of those that we want to correct.”

Minister Jallow said the debate amid morality and law has been debated in the past and will continue even in the future. Nonetheless, he said not everything immoral can be legislated.

The minister further said studies have shown that skin bleaching laws are discriminatory against women and if they enforce the law, it would largely be enforced against women.

Jallow said arresting, prosecuting and convicting women for bleaching could be difficult despite it is applicable.

“If we want to criminalize all of them (bleachers), in fact we are going to make criminals out of our sons and daughters and the problem will still not be solved,” he said.

Jallow said they cannot identify all bad laws and bring them together for repeal or sort of at the assembly.

“And if your principle is going to be unless you bring all the others, we will not deal with this one, then that will be a big challenge,” he said.

Jallow said he does not see that as a strong argument.