Members of the National Assembly, Monday June 18th, suspended the just opened second sitting in the first Legislative year of the National Assembly for 2018, as the Faraba banta incident was brought to their attention. The house was in order and about to resume sitting to table the report of the National Assembly authority, when members called for the speaker to suspend all activities and allow them discuss the Faraba Banta incident. After a detailed commentary on the issue, members expressed utter disappointment with the way and manner the security forces handle the lives of unarmed protesters. According to members, this is unacceptable and condemned the killing of innocent youth who were fighting for their rights.

Members then went for a closed door meeting to discuss about the Faraba Banta incident and eventually proceeded to the Edward Francis Small Teaching Hospital to see the bodies of the victims and their bereaved families. A full delegation of members met with the PRO of the Hospital and explained their mission to him. The PRO led them to the Accident and Emergency Unit of the hospital where four of the victims were admitted in critical condition with drips of blood administered on them. It could be observed that none of the victims could speak or say a word. At the entrance of the mortuary, relatives and friends from Faraba and environs, could be seen weeping openly. 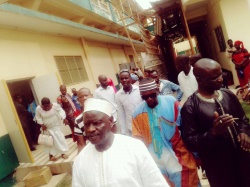 Inside the mortuary, the two dead bodies were covered with white clothes and tied. According to one father of the dead, there is nothing that he can receive on earth that will replace his son; that his son was a gift from God and cannot be replaced.

Members called on Government and the Office of the IGP, the Ministry of the Interior, to address the issue with utmost urgency. The NAMs then proceeded to Faraba Banta in a convoy, to meet family members and villagers affected by this unfortunate incident.