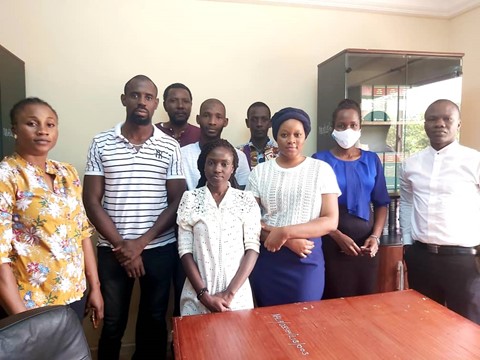 Bekai Saidy and other members of National Agency for Legal Aid (NALA) have informed this medium that they are looking forward to ending their sit-down strike as they anticipate their demands to be met, after the intervention of the Chief Justice (CJ).

Until Tuesday July 6th 2021, the industrial action by members of NALA was still active, as issues of remuneration and mobility were not addressed by the concerned authorities.

The Executive Secretary of NALA in an exclusive interview on July 5th 2021, informed that Gambia’s CJ has intervened to persuade them end their strike and appear before their respective Courts.

Bekai Saidy, Samuel Kebba Baldeh, Gloria Donko, Mama Ngor Jain, Tamsir Jallow, Fatoumatta Taal Saho, Mrs Sawanou Sonko Mendy, Samuel Ade Ndai and Deo Patience Casdia, are the members who have confirmed their participation in the sit-down strike, which they said was against their wish, but that they want a more effective and efficient service delivery.

On the intervention of the CJ, the lawyers said it was out of courtesy and respect they responded to his meeting to mediate the crisis, which is why they anticipate a positive outcome.

The Executive Secretary of NALA told this reporter that a new printing machine has been bought but that they were informed this development during their meeting with the CJ on July 5th.

Ahmed Kemo Ceesay, NALA’s Executive Secretary expressed the hope that the strike will end anytime soon because of the intervention of the CJ.

Asked whether the executive arm of Government has reacted to the their sit-down strike, Ceesay responded in the negative that this was not to his knowledge; that when they met the president to engage him about the institution’s mobility constraints, he did not give them any assurance, but wrote a letter on their behalf for the institution to be provided with a vehicle.

Members of NALA said they want their demands to be addressed so that they can immediately return to Court to represent their Clients.

Gloria Donko who is one of them and should have been in Court if there was no strike, said she has a case before Justice Ebrima Jaiteh of the Banjul High Court and other Courts within the jurisdiction.

Asked whether she is too worried about the impact of not representing her clients, Donko replied in the affirmative, saying there is a likelihood that her cases will not proceed if she is not in Court. She appealed for the concerned stakeholders to address their demands because they cannot effectively represent their clients without mobility.

For his part, Samuel Ade Ndasi said their constraints have been protracted for long; that sometime in 2019, they wanted to embark on industrial action which they later postponed because of the promises that they received from the Executive Secretary.

‘‘As we speak, none of the issues we were promised have been solved and that is why the lawyers thought it is time to stage a sit-down strike,’’ Samuel said.

He said they are aware of the fact that the Executive Secretary and the agency’s board of directors are actually limited to proffer the required resources to address their genuine demands, but there is somebody somewhere who can address the office’s mobility.

On the response of the Executive to the strikers, Samuel said in the letter that was written to them by their head suggests that their demands were brought to his attention. He said several letters have been sent to him since 2019 but very little has been done towards it.

The lawyers said after management related to them what was discussed and agreed with the president, management further showed them a letter where the president “ordered NALA to be provided with a vehicle but none of the requests were fulfilled.

Bekai Saidy, another member of NALA, said the purpose of their strike is to raise their service constraints to the attention of the relevant authorities so that they can perform their job effectively and efficiently.

For the information of the readership, NALA is an institution established by an Act of the National Assembly since 2008, and tasked with the responsibility to provide legal advice and representation to children and adults who are charged with capital offences. Since July 1st 2021, they have been boycotting the Court in the form of a sit-down strike to demand the easing of their mobility, pay rise and printing machines. So far, only the provision of a printer has been confirmed to them by the Executive Secretary, while the issue of remuneration and mobility remain unresolved, at the time of going to press.