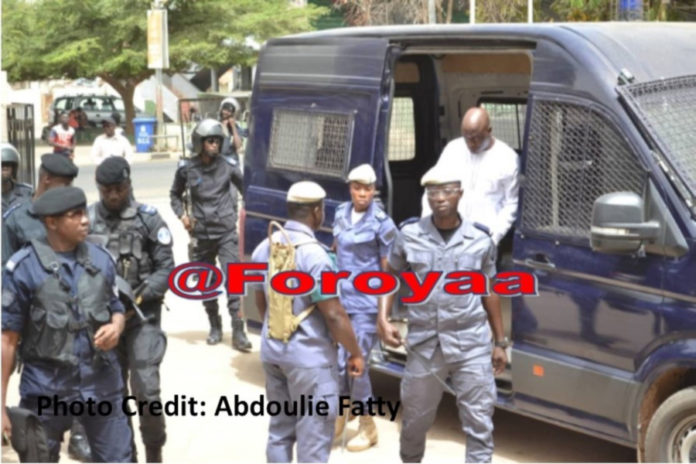 Lawyer A. Sisoho for Yankuba Touray has on Monday made an application for the high court to sign subpoena for the production of documents.

Lawyer Sisoho relied on sections 220 and 221 of the Evidence Act as well as section 241 of the Criminal Procedure Code (CPC) to move his motion for the subpoenas to be signed.

“They are not going to give evidence but to produce documents,” Sisoho said.

Sisoho’s application was supported by a 20-paragraph affidavit sworn to by one Muhammed Sisoho.

“I want to submit straight away that there is no affidavit in opposition to the affidavit in support. It is trite that an affidavit which stands unchallenged, un-denied and uncontroverted is deemed as admitted,” Sisoho told the court as he relied on several decided court cases.

Sisoho maintained that they are seeking through the Judicial Secretary, who is in possession of the Coroner’s Inquest Report and the Executive Secretary of the TRRC, who is in custody of Edward Signhatey’s statements. He added the documents are necessary for their defence.

He added: “With humility, without the production of these documents, it will cause great hardship to the accused and will amount to denial of his constitutional right to fair hearing. The documents are very crucial to his defence.”

Sisoho informed the court that prosecution witness six, Alagie Kanyi testified regarding the dead of Ousman Koro Ceesay and gave two versions of the incident. Sisoho said in one of his versions, Kanyi mentioned that it was Edward Singhatey who killed Koro Ceesay and in the other, he said it was a group who participated in the murder of Koro Ceesay.

Barrister Sisoho said to clear the air, it will be prudent for the documents to be produced.

Meanwhile, defence witness one, Awa Minteh was discharged after the prosecution completed their cross-examination.

“At the time you were leaving in Kerr Sering, do you normally visit your neighbours?” asked Lawyer Abdul Maita Yusuf for the State.

“Do you know Aja Sinyan?” the prosecution’s lawyer asked.

“Yes, I do. She was the wife to Edward Singhatey,” the witness answered.

“At the time Aja Sinyan was living in Cape Point, who was she staying with?” the Principal State Counsel asked.

“I know she had a daughter called Theresa. That is all I know,” Awa replied.

“At the time Ensa Mendy was posted as an orderly to the accused (Yankuba Touray), do you know his rank?” Yusuf asked.

“I think he was a Lance Corporal,” the witness replied.

“At the time Ensa Mendy left, do you remember his rank?” Counsel Yusuf asked.

“I think he was a Corporal,” the witness replied.

“Are you sure or you think?” Yusuf asked.

“I think,” the witness retorted.

“I don’t know,” the witness answered.

“I am putting it to you that, at the time Ensa Mendy was posted at the accused person’s residence, he was a private soldier?” Lawyer Yusuf said.

“I don’t know if he was,” the witness replied.

“At the time you started school, from grade one to twelve, have you repeated any class?” Yusuf asked the witness.

“Yes, I repeated grade one,” the witness said.

“After 1994, can you remember when the first presidential election was held?” the prosecutor asked.

“How do you come to know that each of the two single rooms measured three meters?” Yusuf asked.

“Do you know how many centimetres are in a meter?” Yusuf asked.

“Yes, one hundred centimetres are in a meter,” she answered.

“It is correct that your relationship with the accused person is more than that of in-laws?” Yusuf quizzed.

“Therefore, it is correct that you can do anything possible to protect him from any harm,” Yusuf said.

“Yes, I would,” the witness answered.