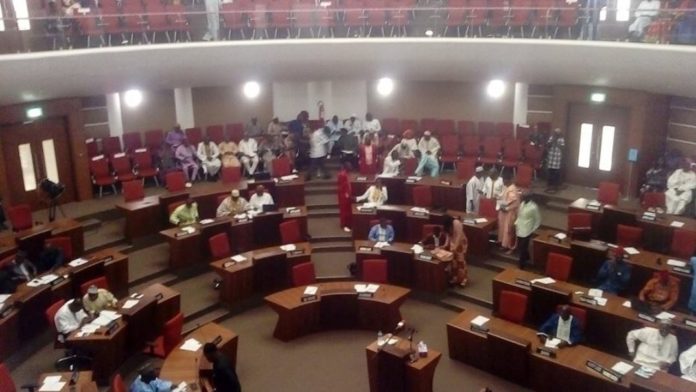 lawmakers have adopted the Defense and Security Committee’s recommendation to place a moratorium on the importation of firearms and ammunitions into the country.

This recommendation was made in the committee’s report on the visit to the GACH Company to find out whether and when the firearms were imported into the country.

The report sparked a heated among lawmakers as some held the opinion that the proprietor of GACH, Mr. Abubacarr Jawara has breached the law while importing the said guns, on grounds that he has exceeded the quantity of guns he was authorized to import into the country.

Others held the view that Mr. Jawara has not breached the authority given to him by the authorities to import hunting guns as he was issued with a “Blanket License”, which did not specify and quantify the quantity of guns he was granted to import.

Tabling the report before the legislature, for scrutiny, consideration and adoption, Member for Upper Fulladou, Kawusu Dawda Jawara, told the assembly that the committee also recommended for the need to provide periodic reports to the assembly, to assess and register progress made in the implementation of the recommendations, that arms and ammunitions Act 2009, should be subject to review by the Ballistic, Security and legal experts, to effect amendment.

Jawara continued, “there should also be an effective and efficient machinery to prevent recurrence or moratorium on the importation of hunting guns into the country, a tripartite inspectorate team to monitor the requisite forms to be used by regional authorities”.

He stressed that during a visit to GACH Warehouse, the security manager, Samba Jawo, informed them that 63 of the 1263 firearms imported by the company, have been confiscated by security agents and noted that of the 1200 weapons received, 238 have been sold at the time of the visit.

He told the parliament that the Proprietor, Mr. Abubacarr Jawara confirmed to the committee of his ownership and importation of the 20-foot container with serial number MRKU9627253 from Turkey.

He said the proprietor told the committee that they (GACH Company) have sought approval from the Inspector General of Police, informing him of the types of hunting guns that he ( Abubacarr Jawara) wanted to import and was finally granted approval from the IGP.

Hon. Jawara underscored that pursuant to Standing Orders 97 and 113, the plenary assigned the committee to conduct an inquiry into the matter and advisee on its essence and implication.

The report was subsequently adopted by the legislature, who tasked the committee to conduct further investigations on the impounded 63 hunting guns and report to the plenary.