Two cases linked to scuffles and arson attacks between castes in Koina were on Monday 17th June 2019 adjourned till 24th June 2019 in the midst of tight security. 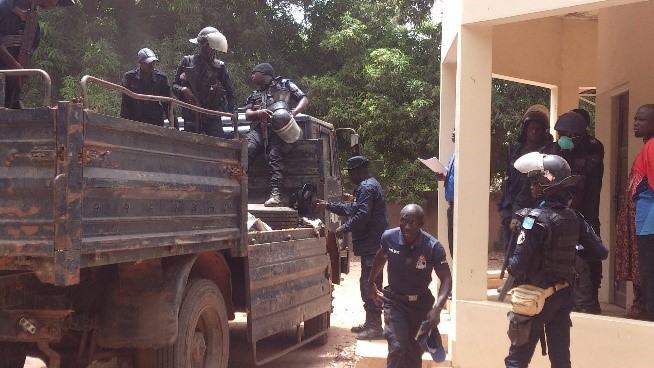 The first case has one accused person, Musa Krubally, who was charged with single count of inciting violence. He was granted bail by the court yesterday.

The police prosecutor appealed to the court to give them one more opportunity to review the investigation on the lone accused person (Musa Krubally) and applied for adjournment.  The application was granted and the case was then adjourned till 24th June 2019 for mention while the accused was granted bail.

The second case involving 24 accused persons was also adjourned till 24th June, 2019. There was a debate though between the defence counsel and the prosecutor as to whether the magistrate has jurisdiction to hear the arson case. The prosecutor argued that this is a matter only for the special criminal court while the defence maintained that the magistrates court has jurisdiction.

The matter was adjourned till 24th June by the magistrate for mention.

Clashes were reported in Koina between people from different castes on Saturday 25th May 2019. According to eye witnesses, houses were razed to the ground by fire and demolition and injuries were sustained. Twenty-five persons were subsequently arrested and charged to court.

APRC Hands Over Petition to President Barrow Through Justice Minister