A Magistrates Court in Kanifing on Tuesday remanded thirty seven suspects charged with arson and unlawful assembly following a protest in Serrekunda over the death of a market vendor.

The 37 suspects are; 3 Sierra Leoneans, 3 Guineans, 2 Senegalese and 29 Gambians including Executive members of the Boka Lokho Association of the Serrekunda Market. 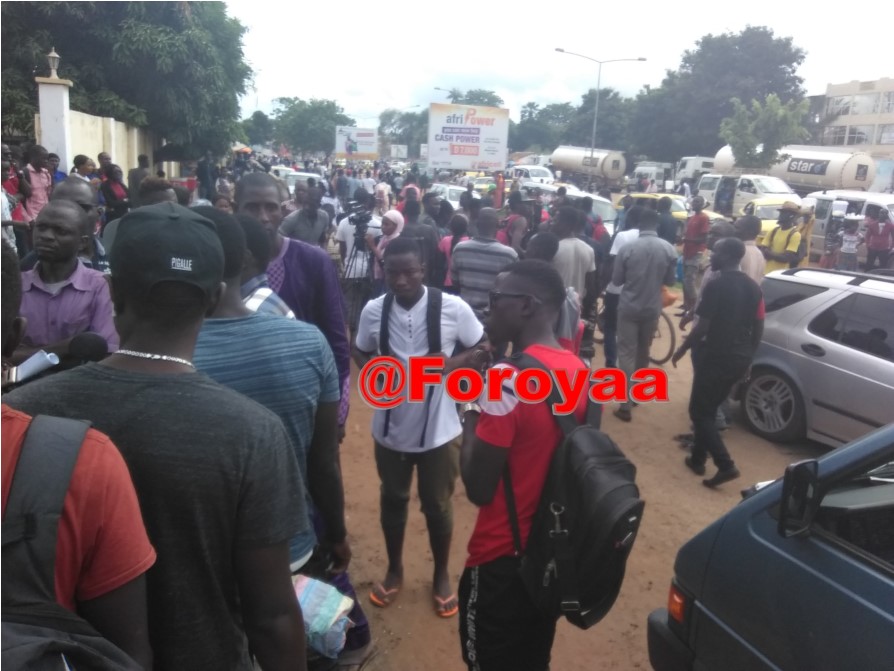 The prosecuting officer, Superintendent M.D. Mballow said counts 4, 5, 6 and 7 are offences which attract punishment to life imprisonment. Mballow said by virtue of legal notice number 3 of 2009 which provides for a Special Criminal Division of the High Court to exclusively try capital offences, he made an application for the matter to be transferred to the High Court for trial. In his submission, Mballow said legal notice number 3 forms part of the Gambian laws by virtue of section 7 of the Constitution. He urged the court to remand the accused persons pending their arraignment before the Special Criminal Division of the High Court, adding that counts 4, 5, 6 and 7 are all offences that cannot be bailed.

Lawyer Patrick Gomez for the suspects, in his objection called on the court to strike out count 4, 5, 6 and 7 rather than transferring the matter to the High Court. He said the provision of the law to empower the case to the High Court is discretionary and does not make it mandatory.

He put forward that the charges are brought as an abuse of process and with bad faith. He said the Inspector General of Police (IGP) knew since at the onset that the charges cannot be tried by the Magistrates Court and yet they include it in the charge sheet.

“The charges were brought before this court just to have the accused persons (suspects) remanded for a long period of time,” Lawyer Gomez submitted.

He said the High Court rules in 2013 clearly discourage this practice, adding that this is to dissuade the prosecution from including charges that they are not ready to proceed with or charges that they cannot prosecute them for. He said the prosecution argued that the court does not have the jurisdiction to hear the case, adding that the charges were included in bad faith because what is sought to be achieved in the case is for the long detention of the suspects. He enjoined the court to exercise its discretion judiciously because the courts are the last hope for people.

He said the police have an interest in the case because the complainant in count 4 is a senior police officer.

Lawyer A. Sisoho commenced his submission, but the matter was adjourned to Tuesday, 3rd September 2019 from 9 am to 11 am for the continuation of Lawyer Sisoho’s submissions and reply on points of law by the prosecuting officer.

According to the charge sheet which is yet to be read, the suspects will be facing prosecution on 8 counts.

On count 1, Conspiracy to commit felony, all the suspects jointly and unlawfully agreed amongst themselves to commit a felony to wit: unlawful assemblies, malicious damage and arson respectively.

On count 2, Unlawful assembly, according to the particulars of offence, the 37 suspects jointly and unlawfully assembled themselves with intent to carry out a common purpose to wit: committing a breach of peace.

Count 3, Prohibition of conduct conducive to breach of peace, according to the particulars of offence, all the suspects while at Serrekunda- Sayerr Jobe Avenue, Bakoteh, Bijilo and Ebo Town respectively and being at such public places with intent to commit a breach of the peace, provoked the public peace by disrupting traffic flow and instilling fear to other members of the public.

On count 4, Arson, according to the particulars of offence, all the suspects jointly and willfully set fire to Assistant Commissioner Gorgi Mboob’s compound.

Count 5 is also on Arson and all the suspects are alleged to have jointly and willfully set fire to the Bakoteh Police Station.

On count 6, Rioters demolishing building, according to the particulars of offence, all the suspects riotously assembled together, destroyed a fence of the Anti-Crime Unit Headquarters of The Gambia Police Force (GPF).

Count 7 is also Rioters demolishing building. The suspects are alleged to have riotously assembled together unlawfully and destroyed a motor vehicle with a registration number, GPF 26 WCR (West Coast Regions’s Court service) a mini bus by smashing the entire vehicle.

On the final count, Riotously injuring machinery, according to the particulars of offence, the suspects riotously assembled together, unlawfully set on fire a motor vehicle registration number GPF 26 WCR which is a mini bus.

Touma Njie’s Case against PPP, 2 Others Fail to Proceed