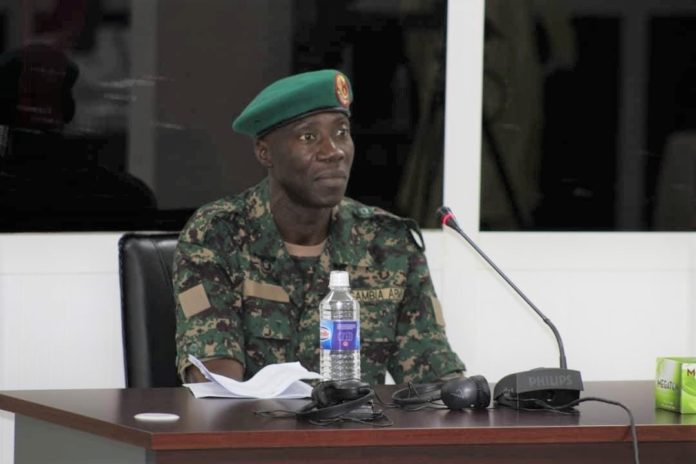 Ismaila Jammeh, a brother to Yahya Jammeh, an ex-President of The Gambia has admitted participating in tortures of people and in the killing of Almamo Manneh, an erstwhile State Guard Commander.

Testifying before the TRRC on Monday, Jammeh said the former President Yahya Jammeh was his brother and they hailed from the same ancestral home.

He denied participating in the arrest and execution of Colonel Ndour Cham, an erstwhile Chief of Defense Staff under the Yahya Jammeh regime. Also, he denied witnessing the execution of Daba Marenah, Malafi Corr and others in Foni.

He said through his hard work as an infantry soldier, he was identified and became a personal protection officer and later as an orderly to the former President, Yahya Jammeh. He said he has never witnessed the ‘junglers’ killing for Yahya Jammeh, though he admitted witnessing torture by ‘junglers’ on people.

“As far as I am concern, the creation of the ‘junglers’ was for a clean purpose and not to execute others for Yahya Jammeh,” he said.

Witness Jammeh said they name themselves as ‘junglers’, admitting that he participated in the first badge of ‘Junglers’ training.

He said when he was at the office of the President as an orderly, he was given the opportunity to select good soldiers who would participate in trainings including the ‘junglers’ training.

“I was informed by Abdoulie Kujabi, the former Director of NIA to select good soldiers who can take responsibility. I give them a list,” he said, as he denied a suggestion by the Lead Counsel that Yahya Jammeh was the one who ordered him to select soldiers for the ‘junglers’ training.

He said the intelligence (NIA) was working hand in hand with the military.  He said he was the one who identified and recommended the selection of General Saul Badjie then Sergeant, Ebrima Jallow, Dembo Jatta, Sambou Darboe, Solo Bojang, Omar Jallow alias Oya, Lamin Sillah, and others he couldn’t remember. He said the selection criteria included loyalty and support to Yahya Jammeh, obedience, discipline among others.

“I was looking for the most hardworking soldiers and respect to the chain of command and reports to job on time. The ability to receive and implement orders was an important criterion,” he said.

He said he carefully chose these people for the maintenance of law, order and peace at the borderline.

The witness said he participated in only two operations involving Almamo Manneh’s and Landing Sanneh and the other is arrest of those involved in the Ndour Cham’s 2006 foiled coup.

“I did not spend long time with the group. I left the group in 2006 after the Ndour Cham’s foiled coup,” he said.

He said he used to live in a house in Kotu belonging to one Lamarana Jallow. He said he was living with Sanna Manjang, Malick Jatta and Mustapha Sanneh who were all part of the ‘Junglers” squadron. He said he was given that house by Tumbul Tamba who flouted the orders of the ex-President Yahya Jammeh to stay with him at his residence and took him to that house.

He said Abdoulie Kujabi, the then Director of NIA came to Kanilai and met the former President and later met Musa Jammeh. He said Kujabi brought a cassette which they played and listened to the conversation. He said the first to speak in that cassette was Landing Sanneh who was talking about how they were going to carry out the planned coup. He added that Landing Sanneh, an erstwhile army commander in the cassette said they have controlled the armouries including the one at the State Guard. He said the situation was so threatening because they were terrified of what was said in the cassette. He said the attack was going to take place on a following day at the Airport.

He said they were recorded by Ousman Sonko, an ex-Interior Minister who was in that planning meeting. He said those who listened to the audio were Yahya Jammeh, Musa Jammeh alias Maliamongo, Abdoulie Kujabi and himself. He said they were given a command ‘to arrest the situation.’

He explained that Musa Jammeh gathered the soldiers in Kanilai and selected soldiers for the mission including himself. He said they were directed to go and find out what they (coup plotters) were doing.

“Our objective was to go to arrest them,” he said.

He said he was armed with AK47.

“We went with a clear intention to get him and not to kill him but the situation did not allow it,” he said.

He said they left Kanilai and when they were at Bund Road, they laid an ambush under the instruction of Ousman Sonko, adding that Almamo Manneh was called by Ousman Sonko to come to the Bund Road that they have something to talk over. He said ‘this was done to avoid bringing chaos in the public because Almamo was very aggressive’. He said Almamo came to Bund Road in haste and when he arrived, he was told that he was under arrest but Manneh refused arrest and opened fire at the soldiers who laid the waylay.

“Almamo started firing at where we were standing. We all fired at him and he died,” the witness said.

He said this was at night and the dead body of Almamo Manneh was put in Ousman Sonko’s car and taken to the Yundum Barracks where they delivered it to the Military Police.

“Almamo was my good senior man but in military when it comes to life, there is no friend,” he said.

He said they left for Landing Sanneh’s residence to get him. He said Sanneh threw a grenade at them at the front gate and used the back gate but he was bagged by the soldiers who were standing at the back gate. He added that Sanneh was arrested and put inside the car and taken to Yundum Barracks.

On the Death of Colonel Ndour Cham

He said he was called by Solo Bojang who told him that there was a coup plan by Colonel Ndour Cham and he was picked by a driver at his residence in Kololi. He said the driver took him to State House. He said at the State House they were given a list of people allegedly involved in the coup. He said he, Sanna Manjang, Alieu Jeng were in one group and the other group composed State Guard soldiers headed by Malafi Corr, the commander of the Operations. He said his group was tasked to arrest Vincent Jatta and they arrested and handed him to the NIA.

He said after the arrest of Vincent Jatta, they were led to Farato by the Police CID at a place where Ndour Cham was believed to have spent the night. He said later, they were told that Tamsir Jassey drove Ndour Cham out of the country, adding that they arrested Tamsir Jassey. He testified they picked the boy they found at the place where Ndour Cham was said to have spent the night to have more information about the whereabouts of Ndour Cham. He said he was also part of the squad that arrested the man who allegedly gave Ndour Cham D5000 to leave the country.

He said he participated in transporting Pharing Sanyang and Pierre Mendy from Mile II to NIA for interrogation. He said he witnessed tortures at the NIA, but he did not go close to the place where the tortures were done. He said the patrol team was not there to torture the detainees at the NIA.  He said the ‘Junglers’ went to the NIA to torture these (alleged coup plotters) people to get them confess. He said he rescued General Savage from the hands of the torturers.  He said he knew it was a plot against Savage and he had not committed any offence. He said he also witnessed the torture of Buba Jammeh.

He said Yaya Darboe was part of the alleged coup plotters and he was tortured in his presence.

He admitted participating in the torture of Lieutenant Bunja Darboe at the NIA by holding his hands while he was being beaten.

He denied participating in the arrest of Ndour Cham, adding that he left the State Guard in 2007.

“I don’t know anything about the arrest of Ndour Cham,” he said.

Execution of Daba Marenah & Others

He said he was called by Tumbul Tamba that he should report to the State House for a border patrol operation. He added that when he reached the State House, he was not briefed as regards the operation and they departed. He detailed that when they reached Mile II, they alighted and his colleagues went in and brought out people who were in plastic bags over their heads. He said two of them were put into their vehicle but he did not witness their execution. He said Solo Bojang led them to where the execution of these men was carried out.

He was born in Bwiam on the 8th September in 1972. He said he became a Gendarmerie officer in 1993 after failing on his two attempts to be enlisted in the Gambia National Army (GNA).

He said on the 22nd July 1994, he was the sentry man at the Central Bank of the Gambia and after ex-President Jawara left the country, he went to State House and later became a sentry man at State House until 2001 when he was discharged from the army. He said he was reinstated in November 2003.

He said in 2004, he was selected to go to Sudan as part of the first GAMCOY peacekeeping force. Sittings continue today.