Is Gunjur Benefiting From Their Fishing Center?

Gunjur Fishing Center has been raising revenue through the storage of fish in cold storage facilities, selling of ice blocks etc. However people in Gunjur are questioning how these monies are collected and managed. Momodou Charreh Gibba, the elected Councillor of Gunjur Ward, said he took it upon himself to organise a meeting among stakeholders benefiting from the Gunjur Fisheries Complex as a concern from the people. 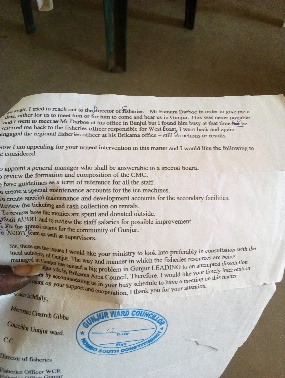 Councillor Gibba in a letter addressed to stakeholders, indicated that funds generated by the Fisheries Center is not secured because the account is easily accessible without written authority which is dangerous. The letter which was read and translated to stakeholders in ‘Mandinka’ by the Chief of Kombo South District Lamin S. Darboe, indicated the Councillor’s concern to draw their attention to what is going on at the Gunjur Fisheries Center and their Beach Committee. The letter is said to have showed the Councillor’s disappointment on the structure of the Center’s management and beach committee membership, from the information he gathered after his familiarisation and study tour.

Councillor Gibba appealed for the urgent intervention of the Ministry of Fisheries in appointing a general manager for the Center, who will be answerable to a special board, review the formation and composition of the Center’s management committee, provide term of reference for staff, create special maintenance account for the machines, review the ticketing and cash collection on rentals, review how monies are spent and donated outside, make a staff audit and review staff salaries for possible improvement, fix annual shares for the community of Gunjur, and also create an supervision and audit team as well.

Speaking during his visit to the Center, the Permanent Secretary at the Ministry of Fisheries and Water Resources Banja M. Banja said Fisheries plays a pivotal role in the country’s economy; that the Constitution of the Republic has mandated his Ministry to declare Fishing Centers across the country as Community Fisheries Center, and that Gunjur was not an exception; that most development in Gunjur is done by the Fisheries Ministry with the assistance of Government and donor partners.

Banja told the gathering that there was an internal audit exercise in 2018 for fishing villages along the Atlantic coast with Gunjur included; that after the audit exercise, it was discovered that most of the concerns regarding the sector could not be addressed in the short term because those responsible during the former regime, are nowhere to be found as some of them are no more alive.

PS Banja said at the dawn of the new dispensation, nothing was found in the accounts of the Gunjur Fisheries Committee (GFC); that now 2.5 million dalasi has been raised in their account; that this is why the internal auditors were told to leave the present Gunjur Beach Committee intact, after their audit exercise; that the GFC has done very well in terms of assisting Gunjur community, by building stalls, toilets, roads, etc.

He said the Ministry will not put up a board of managers and directors as called for by Councillor Gibba, because of the experience they have with such arrangements; that it better to encourage the present management of the Center in their efforts, than to discourage or witch hunt them. He concluded that Gunjur Fishing Committee is doing very well.