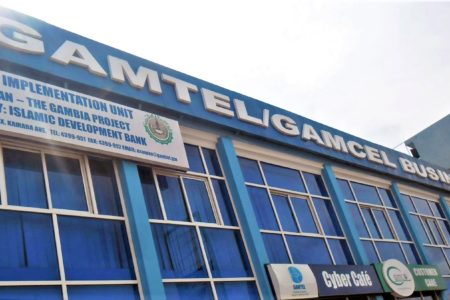 The Public Relations Officer of the National Water and Electricity Company (NAWEC), Pierre Silva has confirmed to Foroyaa that their personnel working for their Indian Project at Farato cut an internet cable which caused internet black-out on Tuesday afternoon 2nd February, 2021.

PRO Silva said the officials of the aforesaid project were digging to lay pipes and “they ran into an internet cable and cut it.”

Silva’s confirmation came after Foroyaa informed him about a credible source who informed this medium that the blackout was as a result of “fiber cut on the internet cable at Farato.”

The source, who pleaded for anonymity, told Foroyaa that NAWEC officers cut an internet backup cable at Farato while dipping and/or fixing their water pipes.

The source added that a technical team was immediately deployed on the ground to ensure they repair the cable and restore the internet back.

“But I think the power has been restored,” PRO Silva said.

According to Silva, he made calls to confirm our insider’s information.

He said first called the IT Director of NAWEC, but his number was engaged, and so he had to call their managing director (NAWEC), who confirmed to him that it is true that personnel working for their Indian Project were digging at Farato and ran into an internet cable and then cut it in the process and he (MD) was contacted by Qcell.

Meanwhile, several hours of internet black-out has disrupted many businesses, especially those within the Kanifing Municipality.

Many work places, which heavily rely on internet to carry out their businesses, suffered the most setbacks. Customer service operators and consumers were among those hard hit.

Also, many people couldn’t buy cash power as a result of this hitch.

“There is an internet problem throughout the country so they cannot sell cash power when there is no internet,” NAWEC PRO, Pierre Silva told Foroyaa.

It was observed that commercial banks in the Kanifing Municipality and their customers were hit too. Sight of frustrations could be seen in the faces of most customers, especially those who rely on daily withdrawal.

Ida Cham, a customer found sitting outside Trust Bank Limited at Westfield, described the internet problem as “frustrating’’ because she came for withdrawal, but she was told that there was no internet.

“I came to withdraw some money for tomorrow’s ‘fish money’ but I felt disappointed after I was told that there was no internet. And I have run out of cash for tomorrow,” she narrated.

A lady who doesn’t want her name to be mentioned, said the bank she went was only rendering services to those who came for deposits. Those who wish to withdraw could not be accorded the opportunity because there was no internet.