By Nelson Manneh The current residents of Kerr Mot Hali village have instituted civil action against the followers of Sering...
Read more

QUESTION OF THE DAY It is clear registration for ID Card is continuing. Rice distribution has been done in many...
Read more

A state must have a security apparatus to protect life and property. Those who carry out such functions are...
Read more

Ahead of the International Women’s Day, women’s rights advocates have expressed their views on the importance of the day.

Mrs. Tabu Sarr, a women’s rights activist who advocates for the rights of women and children, said the theme for this year (equity) is significant, appropriate and apt, because it will make sure that equality is achieved in all aspects in terms of legislation, policies, putting up structures which is important to look at in a gender perspective and also in an equal way of looking at things to realize the balance that we all deserve for development and welfare of everybody. 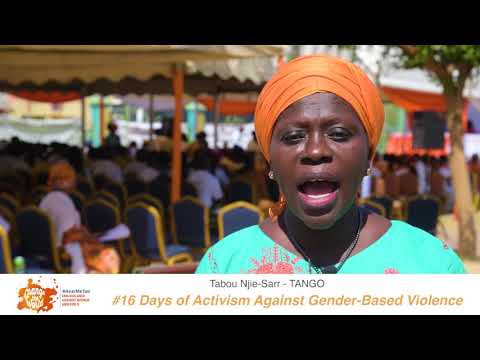 She also said that this celebration raises awareness of the situation of women, because by celebrating women’s day every year advocates showcase what they have achieved over the years, how far they have come and what they can do to remedy the challenges they had faced.

“Advocates like me, do say that every day is for women but choosing a particular day to celebrate women’s day is important,” she asserted.

Tabu further said that she is expecting more for this year’s celebration even though the advocacy has been long and very tiring, very frustrating at times, with all denials from people who are very conservative based on their social orientation; but her expectation is to have equal representation of women across all sectors in the country.

She went on saying that the theme for this year will create more opportunities for women especially in the political aspect to see more avenues because through the forums being discussed this year, talking on the theme, will open doors for women. She also said that women should be empowered in the economic sector.

She said that a woman is a woman everywhere and anywhere you go women are trying to make sure that everything is in place. To he,r a woman advocates for a woman in society and they always try to improve the welfare of women in a society. She said the only difference between women in The Gambia and a woman in Europe might only be that they are in a more advanced world.

She advises the women of The Gambia to do their best in whatever they do, because whatever a woman sets her mind on, she achieves positively. She also advises the women to look out for other women for support and strive to eradicate women abusing women.

Hannah Foster, the executive director of the African Centre for Democracy and Human Rights Studies, also an activist who advocates for the rights of women and children, also expressed her views on the day.

“We need a balance world, presently the world is imbalance,” she said.

She also said that the only way the world can benefit from both men and women is to have a balance world. She cited that when it comes to decision making and a whole lot of other issues, it is the men who are holding the forth and so balancing will also enable women to play their part.

Foster said “we need to contribute to national development equally because there is not much pressure on the men and the women will also take on their roles which are fair and also women need help to become more assertive, independent, help to play their role and to stay in their rightful positions”.

She said that if the theme is implemented as it is, she assumes the women will participate more. She said she is expecting more women coming out to accept that they have roles to play in enhancing their capacities.

“I believe women are getting more ambitious, but we have to agree that each woman cannot do it alone, we have to work together, because it is that collective action that creates a better nation that we want,” she stated.

She also calls for empowerment of disabled women and young women who were impregnated while in school to take their rightful place in society. She said when a woman is seen lifting herself out of poverty, or has the reason to rise above all the challenges to stand tall among her equals, both men and women, she should be supported. She added: “Being able to help, support or mentor others to achieve independence will lead to a  better person, a better Gambia and a better world”.

She encourages the women of The Gambia to be themselves and know that they are important and should take their roles seriously. She advises them to be bold and also reminds them that they don’t need permission in order to play their roles and support and respect each other.

QUESTION OF THE DAY It is clear registration for ID Card is continuing. Rice distribution has been done in many places using coupons. In some...
Read more
Editorial

A state must have a security apparatus to protect life and property. Those who carry out such functions are frontline defenders of the interest...
Read more
Burning Issues

By Mustapha Jallow & Matarr Jassey A soldier was found dead at his guard post in Sinchu Alagie where he was providing security to the...
Read more
Editorial

THE WAY FORWARD The granting of permit to human rights activists to hold processions and demonstrations in promotion of causes of their choice have been...
Read more
- Advertisement -

Abdoulai G. Dibba The EU Funded project that is being implemented in Central River Region South by Action Aid International the Gambia, has trained 62...
Read more

By Momodou Jarju The ministry of women, children and social welfare has revealed its plan to create a Women Bank through a ‘Women Enterprise Fund’...
Read more

Women continue to struggle to get fish

With Madiba Singhateh Women engaged in small scale fishing are faced with several challenges including inadequate access to fund, competition with fish meal factories, and...
Read more
FOROYAA Newspaper is your premier Gambian community portal delivering news on politics, legal affairs and more. We provide you with the latest breaking news and videos straight from The Gambia and the rest of the world.