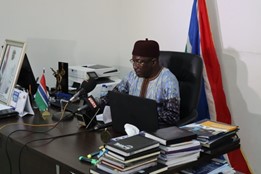 Yankuba J.N. Sonko, the Minister of Interior on Friday 25th June 2021, disclosed that the Gambia will remain a hostile ground for drug trafficking and traffickers. He said this statement is signified by the recent seizure of three tons of cocaine at the country’s seaport.

Minister Sonko said this while delivering a statement on this year’s commemoration of the International Day Against Drug Abuse and Illicit Drug Trafficking.

According to Minister Sonko, the day is observed on the 26th of June annually after it was set out by Resolution 42/112 of December 1987 of the United Nations General Assembly, and to raise awareness on the dangers of drug abuse, as International Day against Drug Abuse and Illicit Drug Trafficking.

Minister Sonko explained that the day reflects on the dangers associated with drug related vices and brings forth curbing mechanisms through collaboration among stakeholders, to ensure a world free of drugs and drug abuse.

Minister Sonko in his statement recognized that anti-narcotic agencies, civil society organizations and individuals the world over, continue to embark on awareness creation against the dangers of drug abuse in their societies and by extension, the socio-economic ramifications on countries. He emphasized that the day is marked to advocate for actions and strengthen cooperation in achieving the goals of a world free from drugs and drug abuse.

“The aim is to mobilize public support in the fight against drug abuse and illicit drug trafficking. Awareness raising programs are thus the means undertaken by anti-narcotic agencies, civil society organizations and individuals the world over, to curb the major problems posed by illicit drugs on societies and nations,’’ he lamented.

Minister Sonko said the occasion also provides an opportunity to spread the message about the diverse cultural and economic implications from the trade in drugs, one hundred years after the war on drugs was initiated in Shanghai.

This year’s commemoration was observed under the theme: ‘Share Facts on Drugs, Save Lives’, which the Minister described as appropriate, in view of the growing trends in sharing misleading information intended to misinform the youth on the destruction of drugs.

Minister Sonko said the theme aims to curb misinformation and promote the sharing of facts around abusive drugs, their health risks and solutions to tackle the world drug problems to evidence based prevention, treatment and care. He cautioned that misinformation is dangerous and therefore call on Gambians and partners to share facts on drugs to help save lives.

“The January 2021 seizure of close to three tons of cocaine at the seaport, amplifies the message to organized criminal groups that Gambia is and will remain a hostile ground for drug trafficking and traffickers. We need to mobilize as a nation, to support law enforcement in carrying out their job,’’ he said.

Minister Sonko said verifiable evidence indicates that The Gambia is highly stable in terms of drug trafficking and assured Gambians and partners that the country is far from being a narcotic state.

He urged for the participation of every citizen in the campaign to take a firm stance against misinformation and unreliable sources, and to share only the real science backed data on drugs, to save lives.