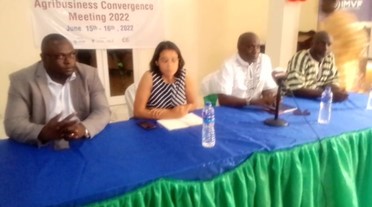 The IMVF has recently concluded a two-day agriculture business convergence for the grantees of the IMVF under the Tekki Fii Project.

The meeting was aimed to avail the grantees the platform to among others share their experience, challenges and success stories in their agribusiness.

Gabriel Gomez, Business Advisor, told the grantees that their responsibilities under the IMVF agribusiness and social cohesion include but are not limited to collection of delivery notes and good receive notes of the grantees, business advisory, formalization process, monitoring and evaluation of business performance of the grantees.

“20 percent of the grantees are female and 74 percent are males. We have a total of 195 grantees in the areas of agribusiness, animal husbandry, horticulture, poultry and processing,” he said.

He cited lack of quality data business failure due to poor financial planning, bad road connection and lack of compliance to implementation, assigned tasks among others as challenges confronting the grantees.

Yankuba Touray, Head of Operation at the National Corporative Credit Union the Gambia (NACCUG), explained that their roles in the said IMVF Project include the collection of forms for grantees and verification visit, and orientation and financial literacy.

“From our evaluation, 15 grantees suffered mortality in sheep, birds and poultry, due to the outbreak of disease. 29 grantees did not have business plan and 23 of the grantees needs external funding in the range of US$3000 to 10,000”, he said.

Mr. Basiru Jatta of the Department of Livestock Service decried that the outbreak of bird flu has affected poultry farmers in the country, while explaining that the department is responsible for livestock health and husbandry services in the country.

“The department’s role is to help in the acquisition of quality stock in small ruminants and poultry. Our monitoring indicated that 114 of the beneficiaries have been successfully trained on poultry and small ruminant production and health”, he said.

He recommended that there should be an advocacy for the protection of the local industry, adding that livestock should be considered in disaster relief and the value chain should also be considered for the funding of processing, storage and marketing of poultry products.

During the closing ceremony, Mr. Patrick Mendy, the Finance Manager at NACCUG, congratulated the IMVF for the steps taken and numerous support they have been rendering to the grantees. He tasked the IMVF beneficiaries to focus on their businesses to be able to sustain their businesses.

Juana Martin, IMVF Project Coordinator, challenged their grantees to be resilient in their businesses, adding that there is no easy walk to success.

Yusupha Manneh and Malick Konteh, among other beneficiaries, highlighted disease outbreaks, high cost of poultry feeds, high cost of day-old chicks, and access to veterinary services, access to medicines and transportation, and water shortage as challenges affecting them in the agribusinesses.

They also hailed the IMVF for the training provided to them, which they said will further strengthen their work in poultry production, animal husbandry and processing and horticulture.