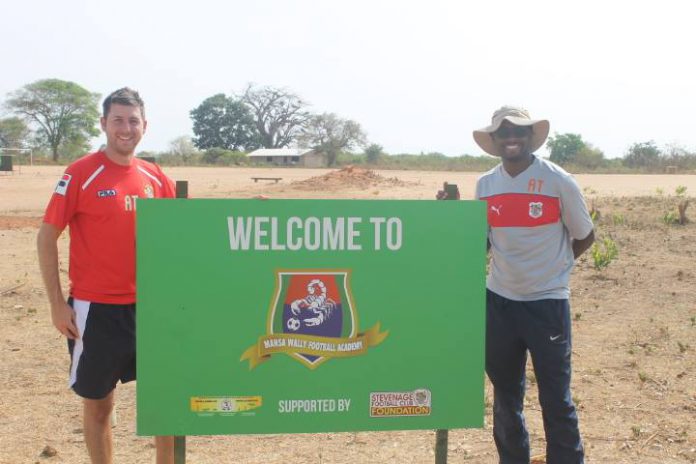 The Gambia Sports Foundation (GSF), a Netherlands Gambia Charity, Saturday, November 19 2016, presented sets of jerseys, footballs, shocks and other sporting gears to the NAC-BRENDA Academy of Kotu at a ceremony held at the Kotu Quarry in the Kanifing Municipality.

Presenting the items, Yankuba Vermeulen, the founder and CEO GSF who also doubles as the President of the Academy said the charity’s main objective is to promote young grass root talents as well as to discourage idleness within the young Gambian population.

” GSF has been supporting young Gambian players to achieve their dreams and also in realizing their potentials in sports more especially, in football”, he said.

Mr. Vermeulen further noted that since it is another avenue for one to earn a decent living, Hus foundation would never relent in pursuing its efforts towards the advancement of the Gambian young grass root sports at all categories. He described it as also the responsibility of the respective beneficiaries to continue working with the foundation which has the interest of the country at heart.

The GSF according to him also embarks in organizing Nawettan competition in various categories ranging from U-7, 10, 16 and senior categories respectively across the country citing the recent one held at Siffoe Village in Kombo South District of West Coast Region and a similar one would be takeing place in Busumbala Village, Kombo North District of West Coast Region.

He said, ”My only advice to the beneficiaries is to carefully handle the items and put them into good use as they are costly”.

Mutarr John Jarjue, the administrator and founder of the NAC-BRENDA Academy formerly AZ Academy, stated that since the inception of the Academy in 2009, it has been operating with the U-7, 10, 14,16 and 18 respectively at no cost attached for enrollment, noting that all is possible through the intervention and humanitarian gesture from the donors. He further noted that the current overall membership is over hundred and many young people are still coming for enrollment.