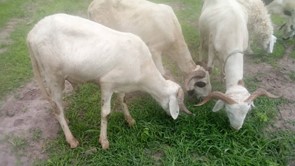 Scores of Gambians have lamented the high cost of rams barely a week before the Muslims observe the Eid al-Adha popularly called “Tobaski” in the country.

The feast is observed globally as a commemoration of Prophet Abraham’s willingness to sacrifice his son for God.

This reporter on Tuesday, July 5, 2022 visited many selling grounds, including Abuko where rams are sold. This reporter met customers negotiating prices of rams with sellers.

Fabakary Kujabie, a buyer whom this reporter met at Abuko, said rams are very expensive this year.

“I have seen rams sold at D25, 000. This is not reasonable at all. An average Gambian cannot afford to buy a ram at that price,” he said.

Mr. Kujabie said Gambians should start to rear rams, otherwise, average Gambians will not be able to buy rams for their Tobaski in the future.

Ebrima Drammeh, another buyer, said it is better to buy a cow than to buy a ram this year.

“A reasonable ram is sold at D15, 000. The government should intervene and help us, otherwise many people will not be able to buy rams for the feast,” he said.

Drammeh said since last week, he has been moving around but he is unable to find anyone he can afford.

Lamin Gaye, one of the roaming ram sellers whom this reporter met, said the business this year is very slow.

“Over the years, I used to cross the border to Senegal to buy rams, sometimes two to three times before Tobaski. But this year, I went to Senegal last month and bought thirty rams and I have sold only eleven of them,” he said.

Mr. Gaye said many people complained that the prices of rams this year have drastically escalated, but he opined that people are not aware of the fluctuation of the currency exchange rate.

“The CFA seems to be more powerful than the Dalasi. The business is not lucrative like before. We make little or no profit in the business now. Rams are very expensive in Senegal where most of us buy them from,” he said.

Abdoulie Sanneh, who stationed his rams around the Brusubi round-about (Turn-Table), said many of his colleagues bought their rams from Senegal and if they calculate their prices and the cost of transport, it will be very difficult for one to sell a ram below D10, 000.

“I know what I have spent to buy my rams and what I spent to transport them to this place. The only thing that will help us is for the government to control the exchange rate otherwise the trend will continue,” he said.

Many people, who spoke to this reporter during the vox-pop, complained about the high cost of the rams.