A Gambian footballer has been cleared of age-cheating and fraud; Foroyaa Sport can reveal.

Bakery, a Gunjur-born yet-to-be-capped, was facing allegations of falsifying documents and lying to German authorities about his age in a bid to get football advantage.

The charges were proffered on him by Sportbild, a widely read German sport tabloid who claimed to have had enough evidence to back up the allegations prompting investigations by the German Football Association and Hamburg Home Office.

Hamburg’s office – the bureau that registered the winger as a minor refugee in 2015 – have completed their independent probing to bring the saga to a close on their end.

In a statement by the complex yesterday afternoon, made available to Foroyaa Sport, Hamburg found the evidence submitted against him to be insufficient and lacking merit.

The institution’s investigations confirmed Bakery Jatta is indeed who he claims to be, born June 1998 tallying with the data they’ve previously registered him when he arrived in the European country an unaccompanied minor.

‘The documents available to the district office do not provide any reliable evidence that would justify infringement on immigration laws, and the doubts raised about the accuracy of the information were not confirmed at the hearing,’ the home office said in a dispatch.

The news was received with much delight by Hamburg Football Club whom Jatta is a crucial player for.

‘This is a very, very important step in the right direction,’ Dieter Hecking Bakery’s coach says.

The 21-year-old Gambian risked losing his career or licensed or in the most extreme of situations, deportation back to the Gambia if he were found wanting.

Not Out of the Woods

While this is considered a step-in direction for Hamburg, the cloud hovering over Jatta is not clear yet with the German Football Association also conducting their own independent investigations.

Jatta was summoned before the German FA weeks back for his version of events and was asked for a written defense. 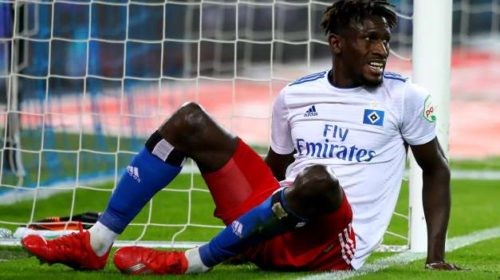 In the interim, a couple of German second division clubs have appealed against Jatta to the league’s disciplinary set up contesting eligibility of the striker requesting Hamburg be stripped of nine points consequently.

The Gunjur-born faced immense pressure during these torrid moments with up to 15,000 opposition fans booing and whistling him in a given match.

His fate now hinges on the final judgment of the German FA.