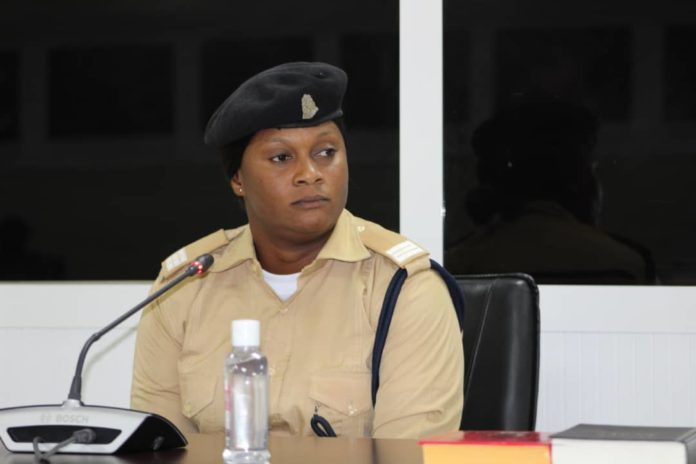 The 41-year-old witness testified before the TRRC on Wednesday regarding the condition of the prisons in the country.

She recommended for the government to build a standard clinic at the Mile 2 Prison.

She was born in Pirang Village in the Kombo East District of West Coast Region of The Gambia in September 1979.

The Pirang born said she joined the Gambia Prison Service in 2003 and their training lasted for 3 months. The Botrop graduate said after her training, she was posted at the Mile 2 Prison as a gatekeeper and her function there was taking details of inmates going in and out of the Prison.

She said she attended a training program at the Edward Frances Small Hospital in Banjul on basics in nursing and how to give first aid to patients. She said the training lasted for six months and after the training, they were given examination and three of them were given certificate.

“After the training we were responsible for taking care of minor health issues at the prison,” she said.

After the training, the witness said she was recommended to be enrolled at the school of nursing in Bansang which did not materialise.

She said at the time they were nine Officers at the Medical Unit and the head of the unit was one Commissioner Ousman Jatta.

“One of the wards at the prison is where we used to admit sick prisoners from the Remand Wing, Convict Wing and Security Wing,” she said.

The officer testified that the only tablet that is mostly available at the prison was Paracetamol which they used to administer to sick inmates.

She said there is always shortage of medicines at Mile 2 adding if a prisoner is sick and needs medication, they sometimes contact the person’s family members to help them with such drugs.

“The patients whom we cannot attend to at the prison are referred to the hospital,” he said.

She recalled that there was a day when one of the inmates, who was brought in without proper documentation, was denied medical care.

“The Mile 2 Prison has a good relationship with the RVTH staff and anytime we referred prisoners, they always attend to them,” he said.

She said beriberi is caused by lack of good diet and it has caused the death of some inmates.

The witness told the commissioners that female prison wardens go to work at 8 am and close by 4 pm.

“I witness about three deaths caused by beriberi and when such occurred, we discussed the issue among ourselves but whether it is forwarded to our superiors, I don’t know,” she said.

Madam Sanneh said she does not observe the food served to the prisoners because it is not part of her responsibilities and she doesn’t go to the kitchen frequently.

“Prisoners who come to the Medic Unit when they are sick always complain about the ‘beriberi food’ given to them,” the witness said.

She said the Jeshwang wing, where she used to serve as at the medic unit, is no different from Mile 2, adding that the way they operated at the Mile 2 is the same procedure as at Jeshwang.

“Beriberi was not common at the Jeshwang like how it is at Mile 2,” she said.

She added: “I knew that some prisoners died in the Prison because of the Beriberi,” the witness told the commissioners.

She told the Commission that some of the inmates were tortured while in Mile.

“Beating Prisoners was happening at the prison at the time and it was part of the system,” she said.