Gambia Ex-Ruler’s Supporters Protest for him to Return Home

By Mustapha Jallow and Nelson Manneh

Thousand supporters of the Alliance for Patriotic Reorientation and Construction (APRC), have on 16th January 2020, staged a protest on Sukuta Traffic-light demanding for the return of Gambia’s ex-ruler Yahya Jammeh from exile in Equatorial Guinea.

Addressing a huge crowd at the protest ground, Fabakary Tombong Jatta, the Interim leader of the APRC said they were not issued permit until at night. He added that there were some people in the diaspora who said they should not be issued permit.

He asked: “What business do those people in the diaspora have in the Gambia’s domestic affairs?” 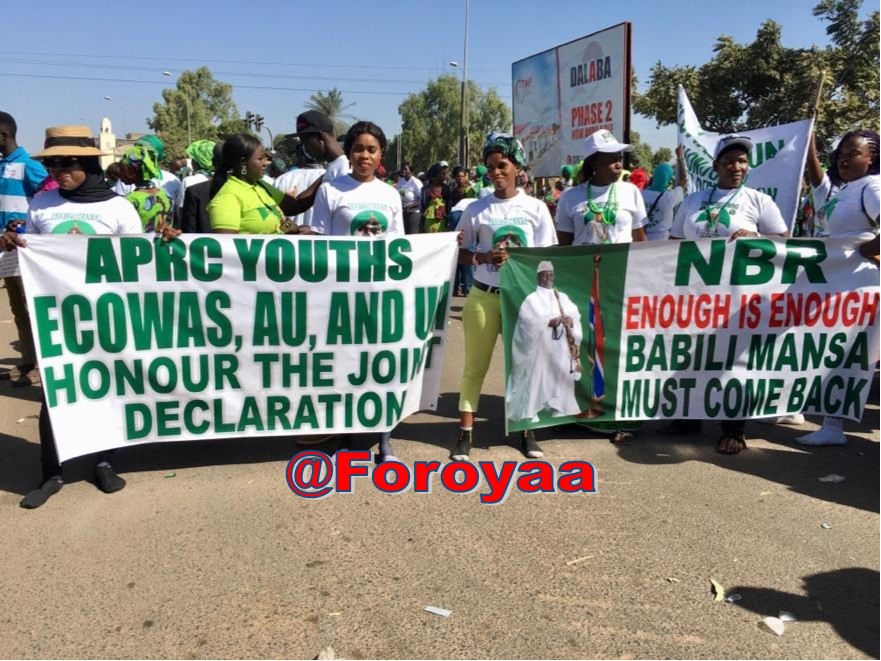 He added, “We are asking the European Union to stop interfering in Gambia’s domestic politics. They should stop exploiting our fishes and other recourses. We are telling President Barrow and his government that only Gambians can develop this country.’’

He further said only Gambians can bring peace in the country. 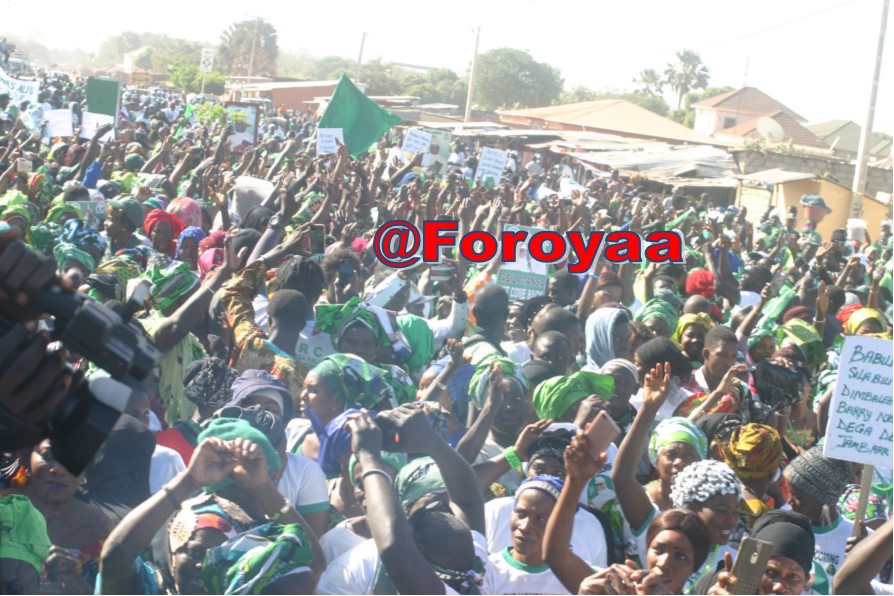 “Our permit was issued to us late, but we are thanking President Barrow, Inspector General of Police and the Interior Minister,’’ he said.

The interim leader further read-out a copy of the petition they submitted to representatives of AU, ECOWAS and UN. He said on the 1st of December 2016, The Gambian people elected their leader in a Presidential election. He said the Presidential election resulted to a political standoff after two results were declared by the IEC. According to him, there were people who held the view that the only way to break the deadlock was through military intervention but others held that it could be resolved either through mediation or legal means. He added that following the intervention of the UN, ECOWAS and AU, Jammeh finally agreed to step down on condition that he would return to the Gambia after three years and that he would enjoy immunity as a former head of state. He said they want the joint communique brokered by the UN, AU and ECOWAS to be implemented by the stakeholders.

Jatta said: “We engaged the UN Office and other stakeholders on our demand privately, but what they told us was that they will look in to it. But since then, they have not done anything about it.”

The Interim Party leader said they have the document which spells out the agreement Jammeh entered with the stakeholders three years ago.

“Government can say that they did not sign any joint deceleration with Jmmeh, but what they cannot say is that they were not aware of it. Now that president Jammeh has gone, people claim that they have never seen the agreement, but this was an agreement done on behalf of the Government by the UN, ECOWAS and AU,” he said.

Yankuba Colley, National Mobiliser of the APRC said: “If they said Yahya Jammeh had killed people, let them wait until Yahya Jammeh returns and responds to the allegations leveled against him.’’

“These are all allegations and we do not believe them. What we believe is what he has done for us. He developed Gambia and it is our right to protest for him to return to the country,’’ he added.

Former KMC Mayor added: “We want to show the world that ex-President Jammeh said no one can remove him from the Gambia. He is a Gambian citizen just like others, so we are demanding for him to come home.’’

He said former President Jammeh is a Gambian and has right to return to his country of birth.

He added: “He has to come back home peacefully and unconditionally.”

Ousman ‘Rambo’ Jatta of the APRC said they have handed over their petition letter to African Union (AU) . He said: “We want our President back. He is the only good President for The Gambia.’’

Asked whether Jammeh will face prosecution when he returns home, he told journalists, “We are here to demand the return of President Jammeh,’’

Dodou Jah the Deputy Spokesperson of the APRC Party said they have been engaging the stakeholders privately on several occasions, but they have not responded to them.

“It is now high time for the party militants to come out to show them that it is not only the executives of APRC who are demanding for the agreement to be implemented, but it is the whole party,” he said.

Fatou Bintou Sanneh 23, and a resident from Bundung said she wanted Jammeh to come back and take part in the 2021 Presidential elections. According to her, there had been a spike in the prices of basic commodities such as rice, sugar, oil and flour after former President Jammeh stepped down from office.

Isatou Jarjue, a hair dresser and a resident of New Jeshwang said: “We want Jammeh to come back to The Gambia. I have never been involved in politics, but I am compelled by the economic hardship we are experiencing in this country. Basic commodities have increased after Jammeh  left this country for Equatorial Guinea.”