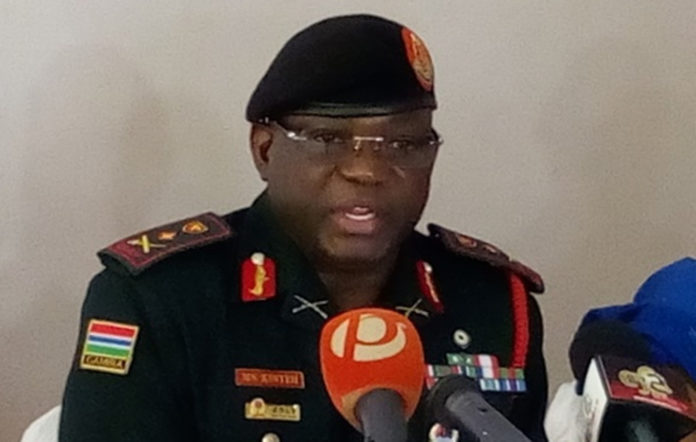 The Gambia Armed Forces have clarified that the request for logistics and staff support by retired Lieutenant General Masanneh N. Kinteh is a temporary arrangement until the former Chief of Defense Staff leaves for his new post in the People’s Republic of China as Ambassador.

A media release from the Army reads: “GAF like many armed forces in the world accord some privileges to both serving and retired officers, soldiers and ratings in accordance with established laid down procedures.”

GAF high command said they wanted to make it clear that Masanneh N. Kinteh was not sacked but rather retired by President Barrow and that made him to be entitled to all statutory benefits such as gratuity as well as other privileges as a senior officer.

They added that Major General Yakubu A. Drammeh did not only consider and grant the request by his predecessor, but also granted it based on humanitarian grounds.

“The Gambia has changed forever and so does the Gambia Armed Forces, GAF in line with her reforms have formulated policies to make it a vibrant and relevant defense instrument to the admiration of all Gambians and non-Gambians alike”, the release stated.

“This shows that the Gambian people have taken ownership of their Armed Forces,” it said.

The Army said they also welcomed constructive and healthy criticisms by the public which they believed will ensure that the Army lives up to its constitutional mandate and other assigned roles to the expectations of her citizenry.