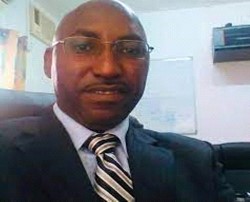 Mamodou Bah, the Director of Food Safety and Quality Authority (FSQA) has advised fish vendors to desist from the use of “sniper” insecticides as a preservative on smoke fish, as laboratory test results confirmed have confirmed the presence of such substances in smoked fish.

According to DG Bah, there was a public outcry sometime in June 2022, on the purported use of pesticides in particular “sniper” insecticide on smoked fish by fish processors and vendors. He said such reports prompted an immediate stakeholders’ engagement and subsequent verification process to investigate the use and presence of insecticides in fish products.

“The public was sensitised on the potential risks associated with the use of pesticides in food products,” he said; that the fact-finding teams were established, which comprised officials of the FSQA, the National Environment Agency, Directorate of Public Health at the Ministry of Health, Department of Fisheries and pesticide experts.

“During these engagements with fish vendors and processors, none of the respondents attested to the use of snipers. However, empty sniper containers were seen at one site,” he said. He said a total of 57 fish samples were collected from seven fish landing sites and nine markets within the Greater Banjul Area.

From the main sample, eleven fish samples were randomly selected as sub-samples for analysis at Ceres Locustox Laboratory in Dakar, Senegal, to determine the presence of pesticides. The result of the analysis indicated the presence of sniper (dichlorvos) and four other insecticide products such as permethrin, abamectin, cypermethrin and bifenthrin.

The FSQA Director further disclosed that results further indicated a high residual concentration of dichlorvos in the samples collected from Bakoteh fish market with a concentration of 9.18 mg/kg. The presence of other insecticides, permethrin, abamectin, cypermethrin, and bifenthrin, was also found.

“The Sniper product found in The Gambia contains a highly toxic organophosphate compound, which is very toxic to human health and the environment. Sniper was originally formulated as a plant protection product to be used only for agricultural use (at 1000 g/l),” he said; that it was also used as a biocide at much lower concentrations (mostly 25 g/l).

Sniper is a banned product in The Gambia due to its toxicity, continuous misuse and abuse of the product.

“The presence of sniper (Dichlorvos) and other pesticides have been confirmed analytically in the samples tested in July 2022. All fish processors, distributors and vendors are hereby warned to cease and desist from the use of pesticides on fish and other food products,” he said. He added that anyone found engaging in such unscrupulous activity would be in breach of the law and therefore shall face the undesirable consequences that come with it. The general public is also hereby informed that this press release will be followed by Risk communication exercises to create awareness on safe chemical pesticide usage to ensure Good Hygienic Practices in food processing safeguard public health and preserve environmental health.

If readers can recall, there was a public alarm indicating that fish mongers use “sniper” insecticide to preserve their fish.

At the onset of the above information, Foroyaa conducted a vox-pop where many fish vendors debunked the claim.

However, FSQA after their investigations in collaboration with the Ministry of Health and other stakeholders also said that laboratory test results confirm the presence of substances in smoked fish.