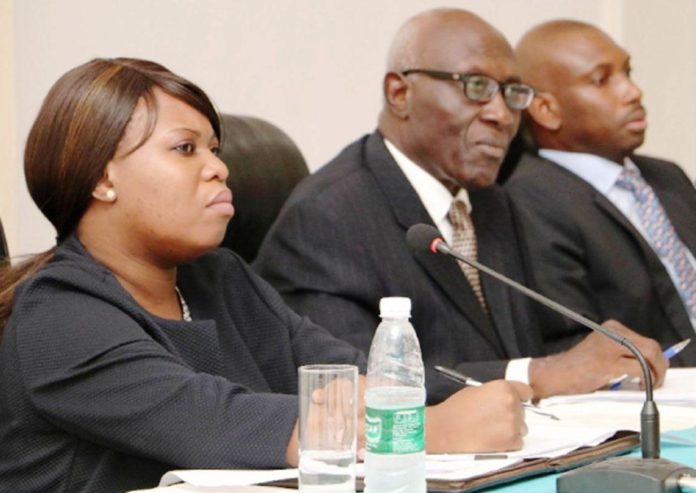 Mrs. Adama Njie, former accountant at the office of the former president, yesterday furnished the ‘Janneh’ Commission with accounting records showing payments relating to per diems paid to the former president and others and their air tickets respectively. According to her, the payments she made were from 2011-2016respectively, from the Special Security Account at the Central Bank. She said in 2013, she made a payment of D69, 639,778.00 further stating that in 2014, she made a payment of D81,413, 827.39 and in 2015, she made another disbursement of D28,186,270.80. She further revealed that in 2016, she made another payment of D63, 897,285.90; that Permanent Secretary 1 dealt with travel matters with her immediate boss; that PS1 used to give her invoices from the travel agencies for her to effect payments. Documents relating to payments from 2011 to 2016, were tendered and admitted as exhibits. Mrs Njie further adduced that some of the payments were made to the former president as per diem, ex-First Lady and Former Vice President. She said the per diem per day for the former president was £350.00 while the former vice president and first lady received £300.00 each per day.

Responding to Commissioners, she said she was instructed to make payments from the Special Security Account, further noting that she was never audited from 2011 to 2016 but that currently, auditing is being carried out.

The next person to testify was Sheriff Sawneh, proprietor of Competence Company Limited who was asked to furnish the Commission with certain documents that were outstanding such as a list of contracts, tax clearances from the Gambia Revenue Authority (GRA) and registrations with the Gambia Public Procurement Authority (GPPA). Mr. Sawneh disclosed that he paid tax from 2012 to 2016 and there was a tax credit in favour of his company for over D3, 000,000. Documents provided by the witness relating to his Company, were also tendered and admitted as exhibits.

Mr. Ousman Jatta alias ‘Rambo’ reappeared and informed the Commission that he received three boats from General Badjie and three from Commodore Madani Senghore; that some of the boats were leaking and they did not catch fish. However, Commission Counsel Amie Bensouda put it to him that under the laws of the Gambia, income generation enterprises are expected to pay taxes and also register as well. However Jatta said he did not pay taxes neither did he register with the fisheries department.

Mr. Jatta disclosed that he did not have an account of the fishing boats at the bank; that he had accounts in different exercise books and that on the 20th of January 2017, his driver absconded with his double cabin pick up where he had some of the receipts and the log book; that even under the former regime, he was expecting to account for the expenses of the boats.