Focusing on Adebayor Alone Will be Gambia’s Biggest Mistake

It’s three days until Gambia flies out to Lome for the first of a double-legged fixture against Togo’s Sparrow Hawks.

Being integral and the marquee in the Togolese national team, the calibre of Adebayor should get defences wary and send chills down the spines of any opposition.

Emmanuel Adebayor has seen it all and remains –from his days in the French Ligue 1 – one of the continent’s most influential figures of the sport. Arsenal, Manchester City, Tottenham Hotspurs and Real Madrid –the world of football’s very best – are the sides blessed to have secured his services up to the moment he peaked. He might now be cutting it in the Turkish Super Lig but Ade could still render devastation on teams. With a predisposition to run at markers and take on defenders head-on, is enough to sum up motive for his continuous inclusion in Togo’s national team, twelve’s years after his international debut for the West African nation.

Gaffer Claude Le Roy will be counting on his experience to shepherd the Sparrow Hawks against an equally strong Gambian outfit when they play host to the Scorpions in Lome October 12. His presence in the penalty box should be lurking danger Gambia must fend off. However, focusing attention on the 34-year-old striker alone would be Gambia’s biggest mistake as the Hawks have, in their midst, other strikers capable of wreaking havoc, reducing, in the process, Gambia’s game plan to tatters and coach Tom Saintfiet into a desolate figure.

Gambia’s coach Tom claimed to have had the list of Togo’s invited players leaked to him even before his opponent Claude Le Roy made public his roster.

A bluff or mind game? Whichever one it is, the Belgian may have realised Le Roy mentioning some strikers as midfielders in the final draft– perhaps a classic exhibition of evasiveness.

Mathieu Dosevi and Ihlas Bebou of Hannover in the German Bundesliga are a case in point. Dossevi is in his thirties but can field in as a striker from the footages seen of him, and is also molded to fit in as a creative midfielder splitting up defense walls and feeding off strikers with killer passes.

Fulham’s Lyod Ayite is a fairly noticeable presence in the English Premier League and thus should be in Saintfiet’s roster of players to lookout for.

For all these though, there are others who could let loose venom too. 27-year-old Peniel Kokou Mlapa is one of them. Boasting a paltry return of 36 career goals in 191 games and plying his trade with VVV in the Netherlands, Mlapa and former French youth international Sunu Giles of the Tuskish Super Lig could both inflict damage.

On that same Togo invited players’ roster, there are new names with sketchy a data namely Kossi Koudagbal. 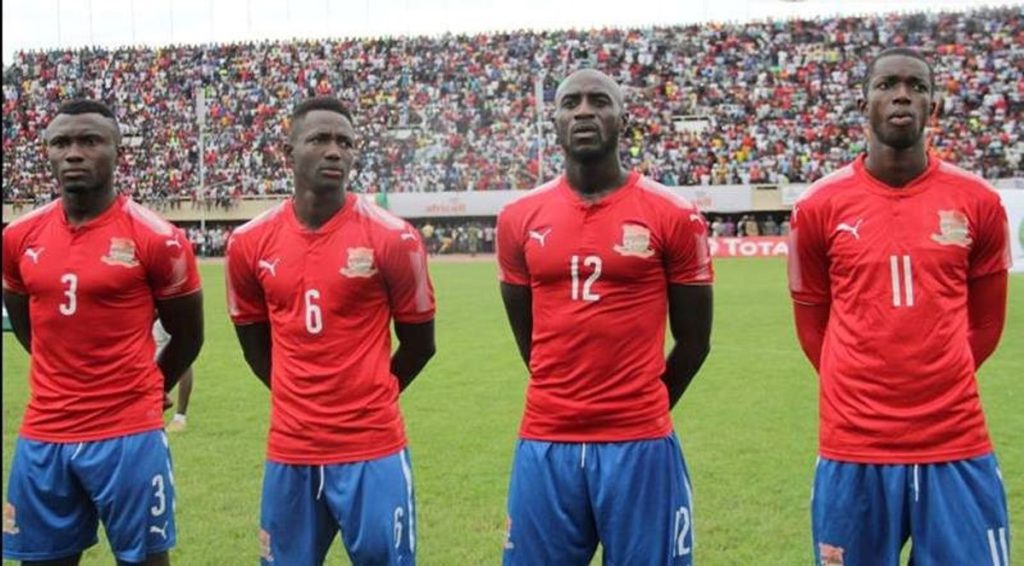 Like many coaches, the Hawks’ tactician has an insatiable penchant to try new talent. Kossi, just 22, is the Togo domestic Premier League’s leading scorer on 15 goals in 22 outings. Despite being streets apart from the league the likes of Adebayor are on, he could pull off an upset when called upon. Clubs around the sub-region are circling for his signature and pundits expect he be accorded some game time – perceiving Gambia as a platform for his rise.

Friday Day-3 of the Africa Cup of Nations qualifier match has all the hallmark of an explosive showdown.

|Meanwhile, there is grudge to settle between Tom and Septuagenarian Roy who replaced the current Gambian coach as Togo’s manager in 2016.

There also will be the desire for Tom to remind Togolese fans and football federation what they’re missing while Claude would be agitated to prove his appointment as the Belgian’s replacement is a correct call by humbling the visiting Scorpions.

Adding spice to this must-watch tie, Gambia will be seeking to apply the brakes on a 35-year run without a win in away matches.

Tom has sought the help of four strikers in Ali Sowe, Musa Barrow, Assan Ceesay and Muhammed Badamosi to get the puzzle sorted but doubts linger over whether the quartet will step up giving Gambia have always had issues of scoring when away from Banjul.