The Councillor of Bartez Ward, Serrekunda, Karim Darboe on Tuesday 12th July 2022 informed this medium of the recent fire incident that ravaged religious materials and partially burnt the Mosque in Serrekunda.

Karim Darboe who was not able to establish the cause of the fire incident said as a councillor he was called and informed that there is a fire incident at the market and when he went there, he met that the fire had caused a lot of damage to the Mosque.

(There is an empty space within the complex of the Mosque and some of the vendors who sell religious stuff around the Mosque normally park their materials there,” he said.

The councillor of Bartez Ward said almost all these materials that were packed by the vendors at the said place were consumed by the fire.

He said this is the first time such has happened. “We have been hearing a lot of fire disasters within Serrekunda market but this type of fire incident has not been registered in my ward. I was surprised to see a Mosque and religious stuff get burned.”

He said that the mosque committee is still investigating the matter.

This reporter visited the Mosque but could not talk to any of the committee members because there was a funeral there at the time.

Maimuna Sanneh one of the vendors who sells beside the Mosque said the fire incident was a surprise to them because this had never happened.

“I have never heard of an incident where a Mosque catches fire. When I was informed, I came and saw what happened,” she said.

This vendor said many holy materials including Quranic books were destroyed by the fire incident. 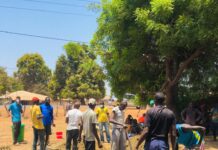