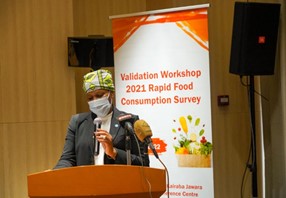 FAO supported the conduct of the survey from 21st September to 21st October 2021 through the European Union-FAO co-funded project titled “Improving food security and nutrition in The Gambia through Food Fortification”. The intervention is key in accessing   assessing the potential nutritional impact of food fortification and bio fortification programme, FAO

Partners took the opportunity to discuss the survey background and objectives, the methodology used, the key survey findings and recommendations before discussing the way forward.

It was a national survey that covered all the eight local government areas in both rural and urban areas. The survey was designed to measure the impact of FAO’s and United Purpose’s interventions in selected sites and to generate information related to food consumption independent of the efforts in selected sites.

The survey, which is the first of its kind was led by the National Nutrition Agency (NaNa) and supported by FAO, the Gambian Bureau of Statistics (GBoS), Directorate of Health Promotion and Education (HPE), National Agriculture Research Institute (NARI), Food Safety and Quality Authority (FSQA), The Medical Research Council (MRC) and United Purpose (UP).  It aimed to provide reliable estimates of the average (daily) per capita intake of the project target food vehicles, which will help, estimate the “expected coverage” of each target crop/food consumed by the population in the project implementation area. Moreover, information generated from the survey will be used at policy and programme area levels in making investment decisions for food and nutrition programmes.

Speaking at the validation workshop, Amat Bah, Executive Director, NaNa Said, “The Gambia is experiencing the double burden of malnutrition where under-nutrition including micronutrient malnutrition and over nutrition co-exist. While Under nutrition is improving, the current situation is still far from the desired.

“There is a need to determine the food consumption levels and frequency of consumption of those foods suitable for fortification and bio-fortification to be used as food fortification vehicles. The Rapid Food Consumption Survey was conducted to address this need. The document is an asset for The Gambia as this is the first comprehensive survey looking into food consumption patterns, and we can build on this for future National surveys,” he added.

“To ensure that the fortification programme has its desired impact, there is need for reliable information on the estimates of average (daily) per capita intake of the target food products,” said Moshibudi Rampedi, FAO Representative in the Gambia. “This survey was undertaken to generate this information. We are hopeful that the results of this survey will inform the relevant stakeholders on what actions need to be taken to further enhance access and uptake of these interventions bearing in mind the ultimate objective of providing sustainable solutions to undernutrition and micronutrient deficiency to the Gambian population.”

Some of the key survey findings include the following: Women of Reproductive Age were not consuming enough quantity of food items such as millet, maize, cowpeas, cassava, rice, Orange Fleshed Sweet Potato (OFS). They cited the non-availability of the food or lack of money to buy the items. The per capita mean consumption of fruits and vegetables in all the age groups and regions of the country was very low while 96 percent of households participating in the survey used bouillon cubes such as Jumbo, Maggi and Ami cubes in food preparation in both rural and urban areas. Furthermore, the percentage of the population consuming bio-fortified foods was low.

The survey concluded that appropriate programs and policies must be made available to improve fortification for nutrition security. They include considering rice and bouillon cubes as potential food vehicles for the National Fortification Programme as well as putting in place a national framework to support storage and retrieval of bio-fortification materials. It also suggested breeding and establishment of multiplication centres for bio-fortified foods that should align with the revised Behaviour Change Communication Programme.