The Head of ECOWAS Mission in The Gambia (ECOMIG), Her Excellency Madam Vabah Gayflor, has commenced visits to all the Contingents under ECOMIG. The purpose of the visit is to assess the operational, administrative and logistical readiness of the contingents as well as address challenges confronting the units in order for them to discharge their responsibilities professionally. The visit is also aimed at reminding personnel of the ECOMIG mandate and the need for all under ECOMIG to work to ensure its success. ECOMIG is made up of three contingents drawn from Senegal, Nigeria and Ghana.

Her Excellency Madam Vabah Gayflor who is also the Permanent Representative of the President of the ECOWAS Commission to The Gambia commenced her visit on Tuesday 20 October 2020 by first visiting the Senegalese contingent at Kanilai and Bwiam. She continued to the Nigerian contingent located at Yundum the following day. She was accompanied by the Force Commander of ECOMIG, Colonel Cheikh Omar Tamba. 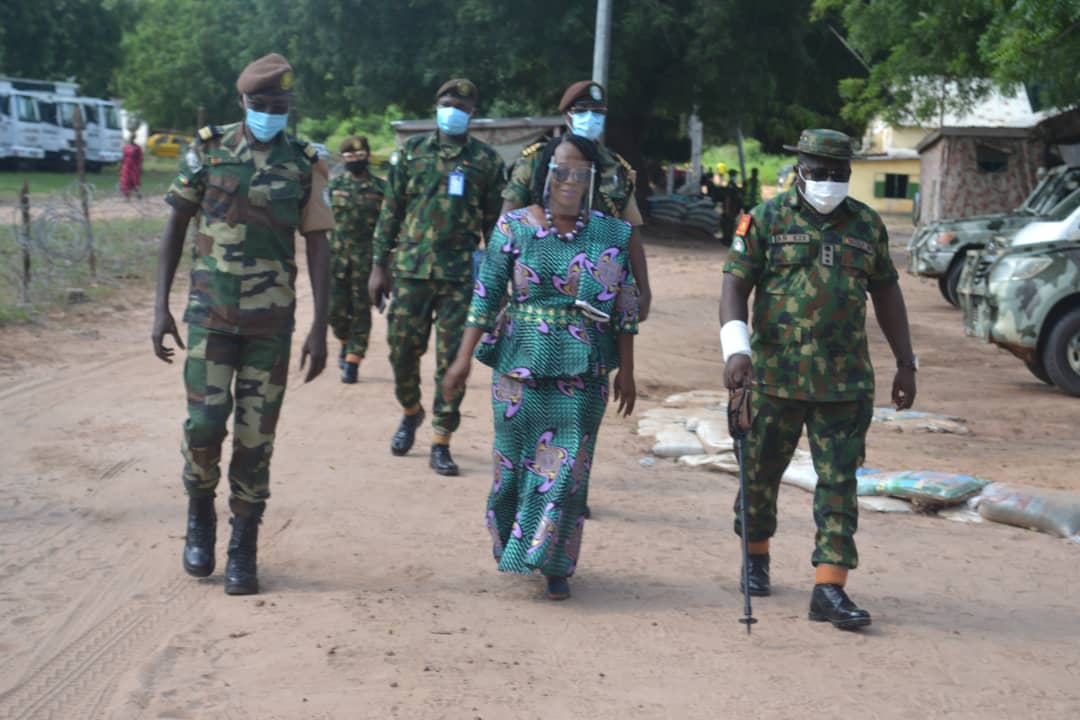 At both locations, she was met on arrival by the contingent commanders, inspected a special guard in her honour, received detailed briefings, toured the camps of the troops and finally held all ranks durbar with the troops.

Welcoming her to Kanilai at the commencement of her visit, the commander of the Senegalese contingent, Lieutenant Colonel Lamine Sarr expressed his appreciation for the visit and assured that his personnel are working within the ECOWAS mandate in collaboration with the Gambian security forces to ensure that their area of operational responsibility remains safe and peaceful. He also briefed the Head of ECOMIG Mission in The Gambia on measures put in place to prevent the spread of the COVID-19 pandemic. He also presented a detailed brief on their operational, administrative and logistical situation.

Similarly, on her arrival at the Yundum barracks where the Nigerian troops are located, Her Excellency Madam Gayflor was met on arrival by Colonel AN Eze, the Nigeria contingent commander who also doubles as the Deputy Force Commander of ECOMIG. She received a detailed presentation on the activities of the contingent who arrived in the Mission area last September.

At both locations visited, Her Excellency Madam Vabah Gayflor expressed her satisfaction with the speedy manner in which both contingents have hit the ground running since they both arrived in the Mission area some few months ago. She was particularly impressed with the number of day and night patrols that both units have conducted since their inception, ensuring that their areas of operational responsibilities remained safe.

Interacting with personnel of both contingents, she conveyed the satisfaction of the President of the ECOWAS Commission to the troops for their dedication to duty and the professionalism they have exhibited so far. She admonished all ECOMIG troops to abide by the laws of The Gambia and work within the mandate issued by ECOWAS. She warned that any soldier who goes against the laws of the country would be severely dealt with.

Her Excellency Madam Vabah Gayflor reminded the troops that they are ambassadors of both their respective countries as well as of ECOWAS. They are therefore expected to exhibit the highest form of responsibility and professionalism to keep the image of the Mission and their countries high.

Touching on the COVID-19 global pandemic, the ECOMIG Head of Mission expressed her satisfaction for the manner in which all the protocols are being observed and advised all personnel to continue to abide by the measures put in place to stop the spread, especially the wearing of masks, washing of hands frequently and the use of hand sanitizer.

She assured that the few challenges identified during her visit would be addressed immediately to enable them perform all assigned tasks at the optimum level. Her next visit will be to the Ghana contingent and the Senegalese Gendarmerie.