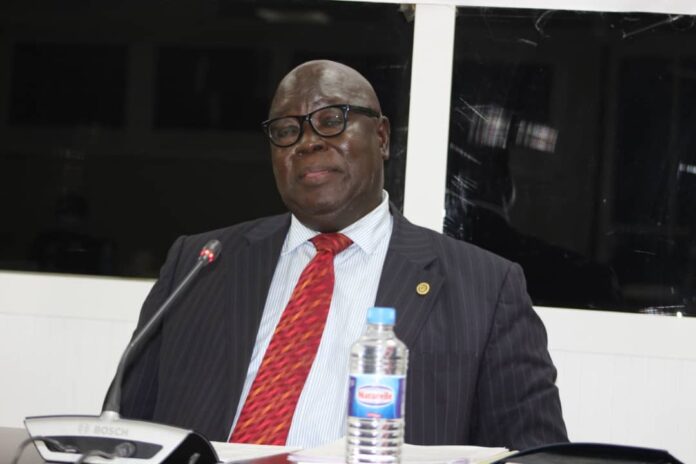 “Jammeh is not a certified medical practitioner. The law categorically condemns that behaviour. What he [Jammeh] was doing was unlawful,” Dr Sallah said.

He testified that the management of HIV & AIDS is a difficult one, therefore it needs good knowledge

“Jammeh’s concoction was more of a fraudulent one as it was not based on any scientific basis,” the doctor said.

He said curing of HIV & AIDS until today remains elusive because the virus cannot be completely wipe out from mankind, but it helps the individual or patients to live a productive life.

He said the claim by the ex-head of state that one cup of his concoction cures HIV & AIDS ‘was not just nonsensical, but absolutely scaring.’

He said Jammeh’s claim for the cure of HIV & AIDS was not only bogus, but fraudulent as well.

Dr Sallah told the Commission that there is nobody who attended the PATP programme that would say that he or she has been cured from the disease.

The expert witness told the Truth, Reconciliation and Reparation (TRRC) that it is not right for a medical practitioner to certify anything without verification.

Dr Sallah said section 39 of The Medical Services Act provides that anyone who presents himself or herself as a medical practitioner without being licensed to practise commits an offence is liable on conviction to imprisonment and a fine or both fine and imprisonment.

He said the President’s Alternative Treatment Programme (PATP) should have been subjected to control as dictated by the Director of Health Services by extension the Minister of Health.

He said all doctors should abide by the said rules and any person who violates the rules should be taken before the Medical Council. He added that the law puts an obligation on all medical practitioners to report infringement of the Act by a professional medical practitioner.

“The doctors that were working with the President should have reported him to the Council without fear, favour or ill will.

He said a person who participates in the cure of HIV & AIDS should either be a specialist in infectious disease or a physician.

He said the virus can be controlled in the system because it stays in the cells of the individual but cannot be cured.

“The PATP was unnecessary and wastage of resources and time. It was false. It was bogus and fraudulent,” he said.

Dr. Adama Amadou Sallah was born on the 19th December 1948 in Banjul. In 1973, he got his Bachelors of Science and by 1976 he acquired medical doctorate from the same University of Carolinka in Sweden and was the first black to graduate from that university.

In Sweden, he served as House Registrar, Registrar and Consultant respectively. In 1982, Dr Sallah came back to The Gambia to work with one guy from Solomon Island in the United Kingdom.

He said in 1984-1985, he decided to open his own Clinic called Lamtoro Clinic. Sallah participated in making Edward Francis Small Teaching Hospital into a referral hospital.

According to him, he is back at Edward Francis Small Teaching Hospital as the Chairman of the Undergraduate and Post Graduate degrees. He added that he also served as a member of the Medical and Dental Council.

During his tenure as a member, he was tasked to write the Code of Conduct of Medical practitioners.

Sallah testified that after a presentation in Ghana for ECOWAS Sub-region, The Gambia’s Code of Conduct and Ethics was selected to serve as the Code of Conduct for the Anglophone countries.

He said, ex-President Jammeh wanted Cuban doctors to come into the Gambia and start practicing without being vetted. He said, as a result, the Cuban Ambassador was so mad and went to protest to the highest positions in government and as a result, Doctor Mbaye Faal, decided to re-sign. He said at the time he was leaving EFSTH some of those practising were not licensed to practice which he said is in contravention of the law.

“The Medical Services Act did not authorize any person to perform any customary therapy which might lead to the death of that person,” the witness said.

He said the Code of Conduct and Ethics were designed to protect the patients and the public.

“Medicine is one of the most regulated professions,” the doctor said.

He said it appeared that the PATP was conventional because he was having inpatient and outpatient, usage of laboratory, the involvement of qualified doctors trained in conventional medicine and therapy among others.

By virtue of Section 41 (2) of the Medical Services Act, the witness said Jammeh should have been stopped by the Director of Health Services and if he refused, then the necessary steps should have been taken. However, Sallah was quick to add that the country was in a dictatorship.

“Yahya Jammeh’s approach and behaviour was an indication that he pretended to be a medical doctor,” the doctor said.

He said the right to privacy and confidentiality of the patients was very crucial, but the PATP violated these two fundamental rights of the patients.

According to him, it is totally wrong and dereliction of duty to parade people before television with the claim of curing HIV & AIDS.

Dr Sallah testified that their code of conduct states that a male doctor is not supposed to diagnose female patients without the presence of another woman to avoid being accused of impropriety.

He said from his experience the videos he saw during Jammeh’s treatment programme is an indication that they have failed morally and ethically and section 39 of the Medical Services Act can be imposed on Jammeh.

On whether Medical Doctors that worked with Jammeh had failed the Medical Services Act, he responded in the Positive.

In his statement, the witness said a medical practitioner is supposed to be someone with integrity and of high moral values. He said doctors that assisted the ex-President had put their integrity at stake.

Dr. Adama Amadou Sallah was born on the 19th December 1948 in Banjul.