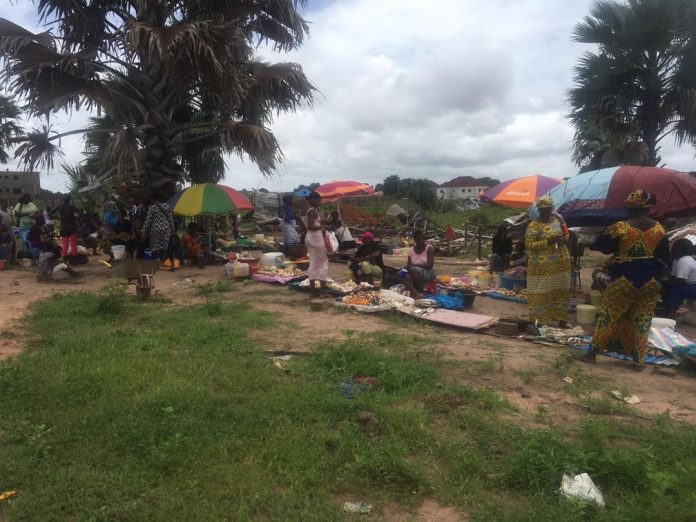 Women vendors, who were taken by surprise a few weeks ago when officers from the Department of Physical Planning demolished their canteens and tables, on Friday called on the Brikama Area Council (BAC) to assess and solve the market dispute in Salagi.

The women residents made the call at their former market on Friday, 12th August 2022, after the physical planning threatened to conduct another demolition on their canteens/tables and stalls at their new place on the same day. The demolition threat came as the women were spotted selling their goods a few metres away from their destroyed market. They were served with notices by physical planning officers threatening to bulldoze all their canteens and tables because they are on the roadside.

“It is BAC who can help solve this market dispute. They should come and survey the place since they played big roles when it comes to market issues. They know the good location of markets. Therefore, we call on BAC to fully investigate the dispute over the market in Salagi,’’ said Bintou Colley, one of the affected vendors.

However, the physical planning director earlier told Foroyaa that the demolished market is a state reserved land and that a place has since been identified for the women to use as a market, which he said developments were currently taking place in the area.

But BAC’s CEO indicated that the council was not aware of this development, saying they were not formally notified by the department of physical planning that a piece of land has been allocated to Salagi residents to be used as a market. He declined to make further comments on the matter until BAC is formally notified.

In July 2022, more than a dozen of canteens and tables were destroyed. No structure was spared during the demolition and the victims are yet to recover from the ‘shocking experience’ as they watched their source of living being ruined. The women believed that since BAC is in charge of establishment and operational markets, they could play an important role in ensuring the dispute is resolved. They said their former place was standard and a good location, which could bring income to them.

The notice did not go down well with the angry vendors and they remarked of not moving an inch because they did not do anything wrong. Our reporters observed that the vendors have returned to their former market, waiting for the physical planning officers.

At their former market, the destroyed canteens and tables could still be seen unremoved by the demolishers. The women were also seen selling their goods, particularly vegetables on the ground with no tables or canteens.

“We decided to come back here (former place), and we are not moving an inch. If they like, let them come with officers and detain us, but we are not going anywhere,” she lamented.

According to Colley, they have been following the country’s laws since the inception but physical planning has given them a nightmare by provoking them every now and then.

Colley said the place they want as market is a standard location for marketing, which could bring income to both vendors and the council, particularly the country’s economy.

She urged BAC to tour the area in order for them to receive first-hand information to find a lasting solution to the problem because they have suffered from the physical planning. She further accused the planning department of playing double standard by doing what BAC supposed to do when it comes to market as well as refusing to consult BAC on the issue of the market in Salagi.

Other affected women vendors expressed similar points and jointly called on BAC to do a site visit and ensure a lasting solution.

Below is one of the notice letters given to the vendors:

“Take note that being satisfied that the canteen, stalls, tables described below has been erected without a development permit and without the prior approval of the West Coast Planning Authority Development Control Regulations, 1995 / declared unsafe under the provisions of the development control regulations, 1996 being empowered to order its removal or demolition of the canteen/stalls 12th August 2022.

“That upon failure on your part to comply with this notice, the planning authority will arrange for the canteen/stalls to be removed or demolished and charge the cost of such removal or demolition to you.”

It could be recalled that the Physical Planning department claimed in an interview with Foroyaa that the canteens and tables of women were demolished because the place is a government reserved property and has been allocated to NAWEC.

This claim was refuted by the women vendors and Ousman Bojang (the claimant), arguing that the land in question was inherited from their forefathers and ancestors.

“We spent all of our savings and even borrowed from relatives to build these canteens. Now they are all gone,” the vendors said.

After seeing the notice, the women vendors and land owner quickly held a briefing with reporters, where Ousman Bojang still insisted that the land belongs to them and they were never compensated and they will do everything possible to protect their properties.

“Of course, we are aware of the compensation of the Salagi Extension. But those of us in Proper were never compensated. So, the authorities should take note of that,’’ Bojang remarked.

Bojang said before he came up with the idea of establishing the market, he had engaged his “Kabilos”, “Alkalo”, Governor, Brikama Area Council and concerned authorities.