The Constitutional Review Commission (CRC), held a consultative meeting with the Members of the National Assembly, to discuss and clarify issues raised by Lawmakers regarding their submissions to the Commission. 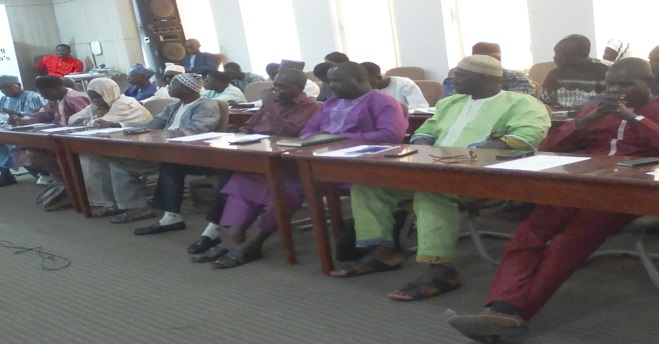 Speaker Mariam Jack Denton in her opening remarks, said the significance of the interface cannot be over-emphasized, noting that it will avail Members the opportunity to give their input to Commissioners as part of their contribution in the Constitutional Review Process.

Commission Chairperson Cherno Sulayman Jallow, thanked deputies for honoring their request which was meant to discuss issues submitted to them by Members of the Legislature, as well as to make the needed clarifications as part of their consultative dialogue with Gambians, of which the Lawmakers are pivotal.

Chairperson Jallow said their role entails creating a platform for Gambians to participate in the constitutional review process of which the consultation with lawmakers is part of, to ascertain their aims and aspirations that they want to see in the new Constitution. He informed Members that the draft Constitution will be tabled before them in the form of a Bill; that the CRC priorities national unity, cohesion and peace, which is a key element that Lawmakers and Government have emphasized to them, in the conduct of their responsibilities.

Chairperson Jallow said constitutional development is a national issue and as such, they have developed documents on action plans to guide them in the review process. This he said creates the national consultative dialogue platform that ensures participation, inclusion, transparency and ownership, as stipulated in the Commissions’ motto.

On their part, Deputies called for the security of nominated members of the National Assembly, with request for selection by a special body; increase in the number of nominated members; proportional representation for marginalized groups such as Children, Women and differently abled people, full financial autonomy of the Legislature to be able to perform its responsibilities and oversight on every institution in the country.

There was also a call for the Positions of Speaker and Deputy Speaker to be made opened, to allow suitable qualified Gambians to apply and handle the two positions.

On residential requirements, the NAMs recommended one year for aspirants, as opposed to six months, and the need to  have a ballot system of voting, and use of local languages in the National Assembly.

Share
Facebook
Twitter
Pinterest
WhatsApp
Previous articleABOUT GAF: At the press conference convened by the Gambia Armed Forces on Monday, the public relation officer dilated on the organisational structure and history of the armed forces of The Gambia
Next articleHealth Minister Unveils Plans For Better Working Conditions
- Advertisement -