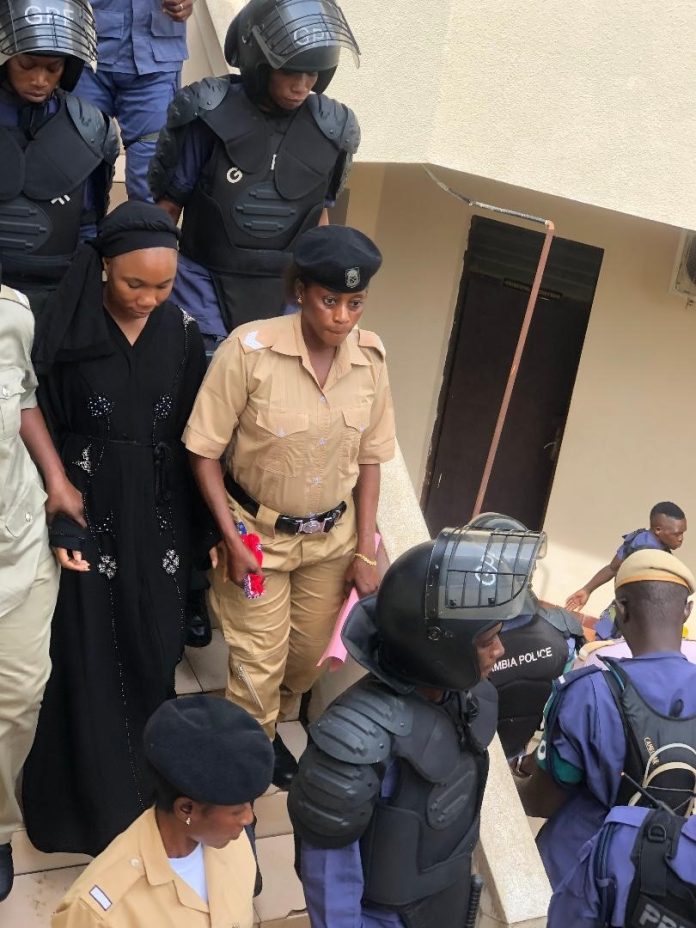 Vacation judge Justice Sidi K. Jobarteh,  will on Thursday 11th August 2022, rule on the bail application filed by Sainabou Mbye, the former wife of Bob Keita. Sainabou and two others are standing trial for manslaughter which attracts life imprisonment.

However, there is no indictment against them before the high court. The matter which was transferred to the high court from the Kanifing Magistrate’s Cour, has two Cherno Mbye and Kilibi Dambelly as the two other persons in this case.

On Tuesday 9th August 2022, the case came for the first time before the vacation judge, Justice Jobarteh.

She submitted that there is no charge against accused persons and hence there is no case before the court. She referred the court to provisions of the 1997 Constitution and Article 6 of the African Charter which all talk about liberty of persons. She relied on Section 19 of the Constitution as she urged the court to grant the accused persons bail. She emphasized that every person should have a right to liberty and no one should be subjected to injustice. She cited many provisions from international legal instruments which are vital on the protection of people’s liberty. She maintained that the charge that was before the Kanifing Magistrate’s Court does not apply to the high court, and said that charged expired as she urged the court to use its discretion to grant the accused persons bail.

She pointed out that Section 22 (a) of the Criminal Procedure Code also supports the fact that no one should be remanded if nothing is filed against them in court. She asserted that the high court has exclusive jurisdiction to enforce fundamental rights and freedoms in the Constitution, and that the Court can make orders to this regard. She asserted that the three should be released because they are not charged and it is not right to detain them without charge, and further said that there is no point in detaining them at Mile 2 without a charge. She said Mile 2 is a center for human rights violation as indicated in the TRRC White Paper Report and the place is not suitable for the Sainabou, Cherno and Kibili to be remanded due to poor sanitation and small space of the cells. She added that the place is unhygienic for the three.

She submitted that “the presumption of the innocent should be guarantee until proven guilty” and further submitted that the State should provide enough security to the three to ensure that their lives and properties are protected, if granted bail. She said the matter is of public interest adding that Sainabou Mbye has been under harassment.

Senior State Counsel Muhammrd B. Sowe objected to the bail application saying the submissions by Counsel Square were mis-statements and lacked facts.

He argued that the accused persons are charged with manslauggter, which is a capital offence and cannot be granted bail. He argued that the submission on the illegality of their detention is inapplicable adding that their detention is legally binding by law, and urged the court to disregard the application for bail. He submitted that the defence are not factual in their submission and their claims are assumptions that are not relevant to the application. He said the TRRC Report and Government’s White Paper to the said report are not in evidence. He said the charge at the magistrate’s court was legal adding the court under Section 62 of the Criminal Procedure Code, has the right to detain the accused persons.

Sowe said there is no law that talks about when a charge is expired, and submitted that the detention of the accused persons is legal.

“Therefore, the court has the right to rely on the magistrate’s charge until the prosecution files a bill of indictment,” he said.

In her reply on points of law,  Counsel Sagarr noted that all her arguments were based on law. She said the rights of the accused persons should be protect by the court and the court has all the jurisdiction to grant them bail.

After hearing the submissions from both counsels, Justice Sidi K. Jobarteh adjourned the case for ruling on Thursday 11th August 2022, at 11am.

As the readers can recall, the three were charged with manslaughter contrary to Section 186  of the Criminal Code at the Magistrate’s Court in Kanifing.

According to their particulars of offence, the three accused persons on or about the 3rd day of July 2022, by unlawful act or omission amounting to culpable negligence, left one Muhammed, a two year old resident of Brusubi inside a car which caused his death.