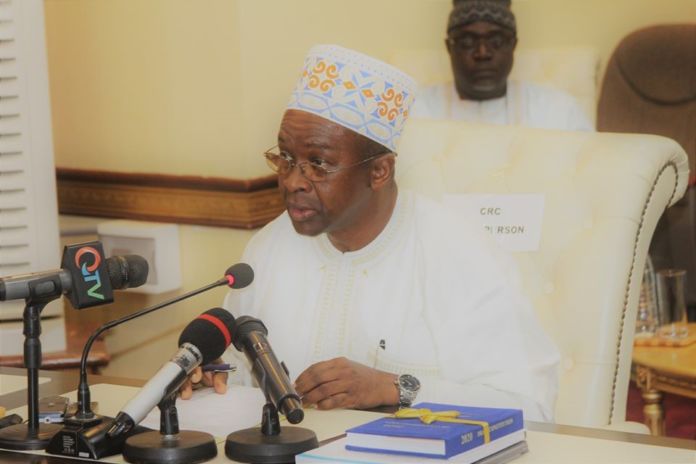 The outgoing Constitutional Review Commission (CRC) has handled the controversy on secularism by taking an objective approach.

The CRC, after publishing the first draft Constitution on the 15th November 2019, was faced with two major controversies after publishing the first draft constitution. Unfortunately, the submissions to the CRC, like the debate on the issue of secularism, took a religious dimension. The second controversy was about citizenship. The CRC in their nationwide consultation tour were told by overwhelming majority of Gambians that any person born in The Gambia should be a Gambian, irrespective of the nationality of their parents.

The CRC has on Monday, 30th March 2020 submitted their final draft constitution to the President which they believe will meet the taste of time. The CRC was established in June 2018 and its Members were sworn in by the President of the Republic on 4th June 2018. The CRC comprised a Chairperson, a Vice-Chairperson and nine other Commissioners. Its mandate was two-fold: first, to review the 1997 Constitution and draft a new one; and second, to prepare a report in relation to the draft Constitution.

Justice Cherno Sulayman Jallow, the Chairperson of the outgoing Commission said they have only a regret that they never envisaged and did not consider would have been as contentious and blistering as it turned out to be. He said this was the non-use in the proposed (first) draft Constitution of the word “secular” in defining The Gambia as a Sovereign Republic.

The Supreme Court Judge said the debate, unfortunately, took on a religious dimension and at times became unnecessarily confrontational.

“Not even the CRC was spared and we were accused of all sorts of things and vilified, sometimes in the most distasteful language,” he said.

Jallow said they met with the leaders of both the Christian and Muslim communities to urge restraint and dialogue between themselves.

“The Gambia belongs to all of its citizens and all deserve to be equally and fairly treated; that goes for all religions practised and/or manifested in this country,” he said.

He averred that the CRC was never oblivious to this fact and they never took sides on the subject.

“While some may say that whatever we do – secular or no secular – we will be damned, the CRC remains steadfast and optimistic that all persons of all faiths will give higher credence to our long tradition of living together as Gambians, by safeguarding and promoting ‘national cohesion, unity and peace’ as provided in section 6 (2) (iv) of the CRC Act,” Jallow said.

The CRC received 65 submissions expressing views for or against the inclusion of the word “secular” in the Draft Constitution. Considering that the CRC had previously researched and deliberated on this subject thoroughly, it sought an independent opinion from its consultants and other external experts. The common thread of the responses received were that the Draft Constitution adequately provides the characteristics of a secular state without the use of the word “secular” and it was therefore appropriate that the word is not used.

The reasons for supporting the granting of automatic citizenship to children born in The Gambia to non-Gambian parents included the assertion that it would be in the best interest of the children, and that not granting them citizenship would render them stateless upon birth. Furthermore, PPP, IPC and FGD participants, and many Diaspora Gambians who participated in the consultations said that citizenship is a fundamental right that should not be denied children born in The Gambia, even if their parents are non-Gambian at the time of their birth.

The CRC considered the public opinion to grant automatic citizenship to children born in The Gambia to non-Gambian parents. It recognised, however, that this opinion required further consideration. It was considered important that persons granted automatic citizenship at birth could have huge consequences on national resources which, if not properly managed, could lead to potential socio-economic imbalances. This took into account the fact that The Gambia is currently one of the most densely populated countries in Africa with limited resources, considering the population density increase from 130 persons per sq. km of land area in 2000 to 225 persons per sq. km of land area in 2018. Accordingly, the CRC came to the conclusion that this is a subject that requires further study (which the CRC could not properly do having regard to the timeframe within which it had to carry out its assignment) and therefore recommends that the subject be taken up and considered further by the Government and the National Assembly.

However, the CRC considered it important that the issue of children born in The Gambia and currently living in the country should be given special consideration in the granting of citizenship. This, like the issue on automatic citizenship requires further study as well. The study must take into account the number of such persons born and living within the country as at 31st December, 2019 and a determination of resource capabilities and distribution. The cut-off period of 31st December 2019 has been provided specifically for 2 reasons. First, to recognise this category of children born in The Gambia of non-Gambian parents and living in the country; and second, to prevent an undesirable rush to the acquisition of citizenship for children in an uncontrolled atmosphere before a proper determination is made on the issue of automatic citizenship (that is, whether or not the country can handle such an arrangement).

It is in this context that the CRC considered it prudent for the National Assembly to consider this category of children born in The Gambia of non-Gambian parents for purposes of according them Gambian citizenship. This would have taken into account the results of the study recommended. In a similar vein, the National Assembly is empowered to consider enacting legislation for the registration of other persons who are not eligible for Gambian citizenship under Chapter IV of the Draft Constitution.