The Clerk of the National Assembly, Momodou A Sise, said effective and responsible journalism is a fundamental phenomenon in parliamentary democracy.

Clerk Sise said this on Thursday 29th October 2020, while presiding over the opening ceremony of a three day training of parliamentary reporters. The training organized by the National Assembly is organized under the theme “Parliamentary Democracy Enhanced Through Responsible Journalism and Effective Media Coverage”. 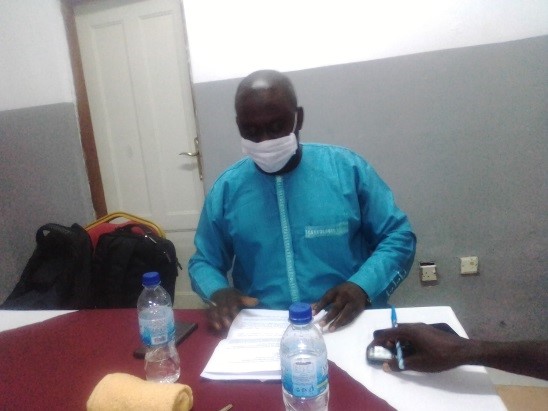 He added “there is great wisdom and merit to appreciate that the Fourth Estate as a geo-political constituency should endeavor to present parliamentary affairs in a constructive and informative manner relevant to the democratization process of any nation”.

He explained that studies have shown that effective, efficient and responsible journalism contributes immensely in the renowned successes of modern parliamentary democracies, thus effective media coverage of parliamentary affairs, deepens public trust and public interest to the entire legislative structure and business.

He added: “More so, as an important constituent to the national assembly, media practitioners by virtue of your ethical values and professional etiquette continue to subject parliaments worldwide to both public and media scrutiny and oversight”.

He remarked that in their case, these virtues of this noble profession can better be appreciated by providing a well-structured training course targeting accredited media practitioners reporting from the national assembly.

He averred, “Consequent to this dispensation I am hopeful that this elaborate perspective of the current national assembly establishment would ensure that parliament remains in the purview and is also within the door-steps of the electorate and public at large”.

He also highlighted that the training focuses on improving legislative reporting and building an effective relationship between the national assembly and the press, as well as further provide both the media and his office with an opportunity to outline areas in which legislative reporting could be improved.

He expressed optimism that the outcome of the training will enhance the good working relations between the national assembly and the media.

Speaking earlier, Mr. Gibaru Janneh, Head of Communication at the National Assembly, underscored that the initiative aims to enlighten media practitioners on the proceedings and terminologies of the Assembly, to accurate and effective reporting on legislative matters.

By: Kebba AF Touray The Gambia Public Utilities Regulatory Authority (PURA) has disclosed in a press release that the authority...
- Advertisement -
National

The University Of The Gambia And Its Dilemma