By Momodou Jarju Built on the outskirts of Banjul along the highway linking Serrekunda and the capital, Mile II was...
Read more

By Momodou Jarju The Gambia is working on plans to introduce a policy that will regulate donated medical items to...
Read more

Candidates contesting for the Councillorship seat in Bwiam Ward in the Foni Kansala Constituency of the West Coast Region, are criss-crossing their Ward to canvass for votes from the electorate by putting forward their developmental agenda when elected Councilor.

These candidates have been moving the length and breadth of their ward, according to their campaign itinerary.

Isatou Jallow, the only female candidate contesting under for the United Democracy Party (UDP) in Bwiam Ward, said the people of Bwiam and environs, are gardeners and need urgent help to improve their livelihood than they are doing now.

“We have a market in Bwiam that needs improvement. The market has bad toilets that need urgent repairs. There are other villages that are off the high way and need good access roads,” she said.

She remarked, “Some villages are without electricity and all of this will be considered when elected”.

Mr. Essa Bojang, the incumbent candidate who is vying for re-election under the APRC Party, said he has served the people of Bwiam Ward for the past two years; that he has many development plans he is ready to implement, when voted into office. 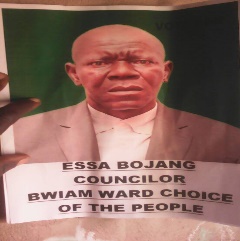 “I have been working with the people of this Ward and I know their problems. I am ready to work with them,” he said

The APRC Candidate said the Bwiam Ward already has a committee that looks into the development agenda of the ward and prioritizes them; that this committee consists of two people from each village who come together to work in order to develop their Ward; that some of the satellite villages in the Ward, urgently need roads, water and other facilities, and that all these are part of his development agenda.

He said he has the solution to the people of the Ward.

By Momodou Jarju Built on the outskirts of Banjul along the highway linking Serrekunda and the capital, Mile II was...
Read more
- Advertisement -
Your Representative

By Momodou Jarju The Gambia is working on plans to introduce a policy that will regulate donated medical items to ensure the country does not...
Read more
Education

When will the by Elections be held?

Question of the Day The IEC should give an update on what it is doing regarding the two By elections that are due. By Elections...
Read more

Essence Of Opposition In Politics

We have seen how democracy has been able to provide the breathing space for the existence, growth and survival of multiparty systems, a level...
Read more

The United Democratic Party on Tuesday expelled the Chairman of the Brikama Area Council Sherrifo Sonko and two other councilors from the party barely...
Read more

By Nelson Manneh The Independent Electoral Commission will conduct a by-election in Kerr Jarga Ward to fill a vacant seat in the Kerewan Area Council....
Read more
FOROYAA Newspaper is your premier Gambian community portal delivering news on politics, legal affairs and more. We provide you with the latest breaking news and videos straight from The Gambia and the rest of the world.