Both Barrow And Bar President Lay Emphasis On Independent Judiciary

By: Kebba AF Touray Halifa Sallah, the Member for Serrekunda, on Friday 27th November 2020, moved a motion for the...
Read more

Has Foroyaa Diverted Its Covid-19 Grant To Pdois?

QUESTION OF THE DAY The National Assembly this year approved the allocation of fifteen million dalasis to media entities in...
Read more

During the ceremony to mark the opening of the legal year yesterday, both President Barrow and the President of the Bar Association lay emphasis on the independence of the judiciary.

President Barrow did not give assurance that he would not interfere in judicial administration, he went further to dwell on the commitment of his government to institutional, administrative and legal reforms within the judicial system. 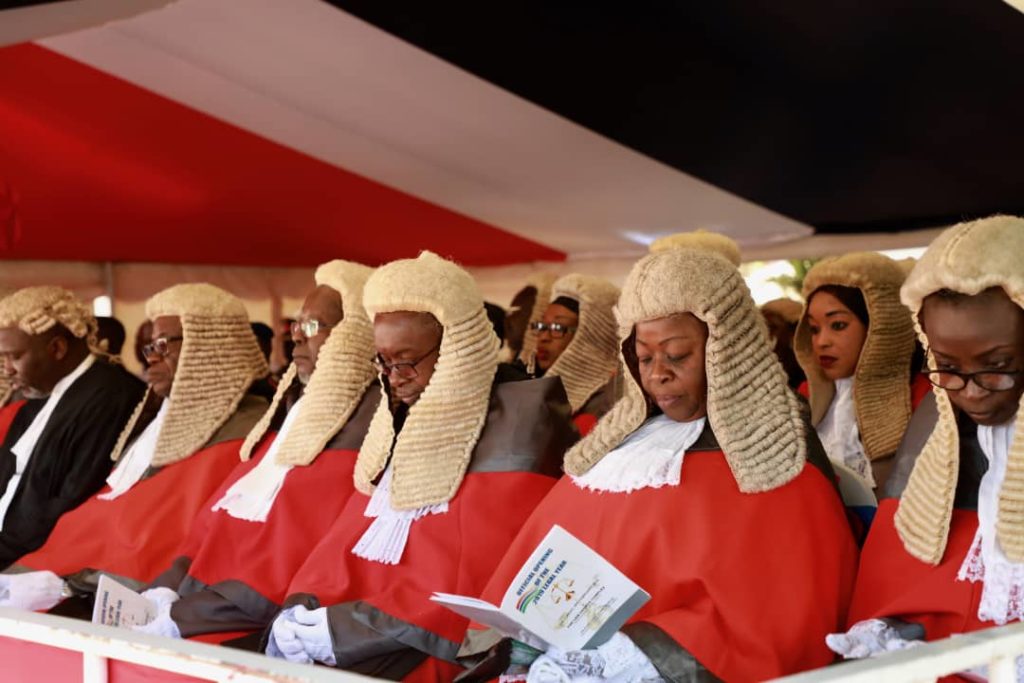 President Adama Barrow said after assuming office, his Government undertook a number of measures to stabilize the economy, restore public confidence and strengthen democratic institutions. Accordingly, the first strategic priority of the National Development Plan (2018-2021) is “restoring good governance, respect for human rights, the rule of law and empowering citizens through decentralization and local governance.” He said the government has taken a number of strides in fulfilment of this development aspiration.

“After many years of judicial mal-administration, we sought to sanitise the judicial administration and ensure judicial independence in the country with the appointment of our distinguished current Chief Justice. This was followed by the reconstitution of the Supreme Court after a three-year break. In 2017, we ‘Gambianised’ the Judiciary with the appointment or reinstatement of twelve Superior Court Judges as opposed to the intolerable practice of sacking Judicial officers without any just cause. As witnessed in the past, no judicial officer has been arbitrarily dismissed from office since I assumed office. On this auspicious occasion, I once again pledge my firm commitment not to interfere in the judicial administration of the country” he said.

He said his government has the plan to improve the working conditions of judicial officers.

“My Government is also committed to attracting the very best legal brains to our judiciary. It goes without saying that this can only be achieved by offering better conditions of service for judicial officers. Accordingly, effective January 2019, we have approved an improved payment package for judicial officials,” he said.

He said his Government has instituted a criminal Justice and Prisons legislative reform project to repeal the laws which were used as instruments of repression against Gambians. According to President Barrow, the goal for this decision is to attain a just society. He said the process involves a review and redrafting of the Criminal Code, the Criminal Procedure Code and the Prisons Act for the first time since attaining Independence in 1965, in order to align them with international norms and best practices.

“Court cases still move at less than an ideal pace; legal fees are still very high for the average citizen, and many Gambians still have to travel long distances to access courts outside the Greater Banjul Area. These challenges and many more will have to be overcome by the joint efforts of the Executive, the Judiciary and the legal fraternity. Together, we can overcome them,” he concluded.

According to Counsel Rachel Mendy, President of the Gambia Bar Association, the paramount quest of the Bar Association has been, and will always be, for the Constitution and its provisions in regard to the rights and freedom of the citizen to be upheld and be regarded by all authority as sacrosanct; for the rule of law to be observed by all, and the independence of the Judiciary respected.

“In our opinion, the independence of the Judiciary is an issue, which is as important and critical to our progress as a nation that it requires to be given constant attention,” she said.

She said there should be an insistence on obstacles to the ready dismissal of judges, and prohibition of the vesting of judicial functions other than in duly constituted courts of law. She added that the judiciary should be independent financially.

“The judiciary should be ready and poised to undertake the onerous responsibilities and duties that will emanate from the ongoing legal processes with regard to wanton abuse of the law and human rights of many citizens.  This will require the availability of sufficient resources for ensuring the prompt and fair dispensation of justice.  The courts must be credible, and be seen to be apolitical. This proposition for the financial independence of the Judiciary is vital in that an independent Judiciary is as valuable to Government as it is to the people as a whole,” she said.

She said the way forward demands that all Gambians, both young and old, should engage in activities that bring about progress, peace and stability in the nation, with a spirit of reconciliation bolstered by a democratic culture, and founded on the strict observance of the rule of law and justice for all.

She disclosed that the Bar Association will be launching its Law Clinic on the 6th of February 2019 adding the GBA is also currently working on a scheme for the introduction of continuing legal education, and some other programs that will strengthen the Association with a view to making its services more accessible to all interested parties.

“Much as the work ahead of us may seem great and demanding, I want to believe that it will not be beyond our keen and collective efforts as a nation endowed with a lot of blessings.  Let us, therefore, strive to live up to the mantra: “NEVER AGAIN,” she concluded.

By: Kebba AF Touray Halifa Sallah, the Member for Serrekunda, on Friday 27th November 2020, moved a motion for the Assembly to rescind its decision...
Read more
Burning Issues

Has Foroyaa Diverted Its Covid-19 Grant To Pdois?

QUESTION OF THE DAY The National Assembly this year approved the allocation of fifteen million dalasis to media entities in order to strengthen them in...
Read more
Editorial

You Need To Know What Is In The Budget

Up till the time of going to press late last night Deputies at the National Assembly were debating the Estimates of the expenditure for...
Read more
Your Representative

In a move to improve road safety standards and to minimize accidents on the roads, the Ministry of Transport, Works and Infrastructure (MotWI), in...
Read more
- Advertisement -

In a move to improve road safety standards and to minimize accidents on the roads, the Ministry of Transport, Works and Infrastructure (MotWI), in...
Read more

By Yankuba Jallow Dr. Lamin J. Sise, the Chairman of the Truth Reconciliation and Reparations Commission (TRRC) has disclosed that they have obtained the approval...
Read more

By Yankuba Jallow A police witness in the 3 Years Jotna criminal case on Wednesday said the 26th January 2020 protesters were hostile and violated the...
Read more
FOROYAA Newspaper is your premier Gambian community portal delivering news on politics, legal affairs and more. We provide you with the latest breaking news and videos straight from The Gambia and the rest of the world.